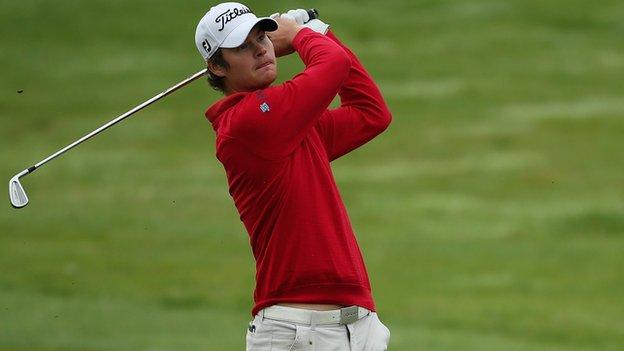 Espen Kofstad made the early running in the Wales Open on the first day of qualifying for next year's European Ryder Cup team.

In the opening group with Ryder Cup skipper Paul McGinley, the Norwegian hit a seven-under-par 64 opening round.

Kofstad birdied the 15th, 16th and 17th holes at Celtic Manor before producing an eagle three at the last.

Kofstad won the Challenge Tour last season but has been struggling with a neck injury this year that has seen him slip to 149th in the European Tour's money list.

"I have been very, very calm the last two weeks," said the 26-year-old.

"I started to settle down a bit. I was a bit stressed and tentative and wasn't able to practice as much as I wanted to with my neck injury.

"Today I wasn't nervous and it felt really easy. I kept hitting the shots and they came off in the end. I got a little lucky I suppose, holing a long putt on the 17th and the bunker shot on the last. I was only trying to get it 10-15 feet past the hole because it was a tough shot.

"It would be great to play in the Ryder Cup, although I can't really expect a spot. But I put in a decent application today."