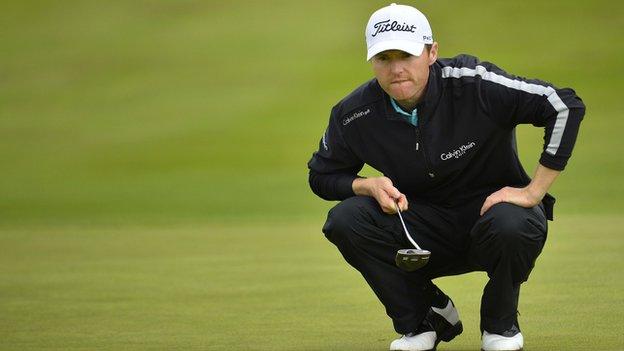 Michael Hoey missed the cut at the Northern Ireland Open at Galgorm Castle after a four-over-par 76 left him well down the field on four over par.

Hoey called a two-shot penalty on himself as he carded a triple-bogey seven at the 11th, his second hole.

Portrush's Alan Dunbar (74) also missed the cut by one shot on level par.

Dutchman Daan Huizing leads on 11 under while Dermot McElroy (70) and Jonathan Caldwell (69) are the best placed NI players on five under.

Sweden's Jens Dantorp and European Tour winner Ross McGowan are three behind Huizing in tied second with four players a further shot back.

Former Walker Cup player Caldwell, from Clandeboye, moved into the running thanks to a 69.

Gareth Shaw (72) and Northern Ireland amateur Reeve Whitson (69) made the cut on two under.

Richard Kilpatrick and Paul Cutler both registered rounds of 72 to finish four over.

Hoey, a five-time European Tour winner, told reporters that he was "massively disappointed" not to be involved in the weekend's action after a round in which "everything that could go wrong did go wrong".