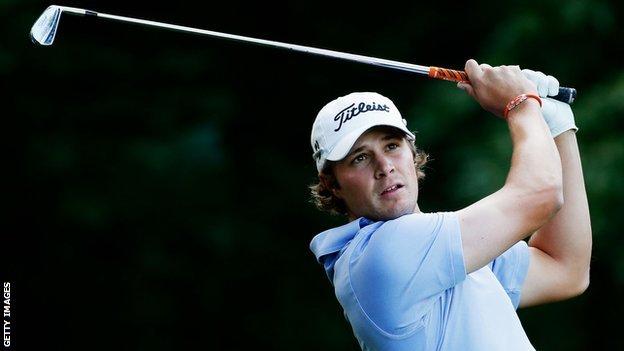 American Peter Uihlein will take a three-shot lead into the final round at the Wales Open after carding a four-under-par 67 on Saturday.

Englishmen Matthew Nixon and Graeme Storm, and Ireland's Damien McGrane, are the best-placed home prospects. The trio are five shots off the lead.

Surprise halfway leader, Wales' Liam Bond, is back at two over after a 78.

Former world number one amateur Uihlein won the Madeira Islands Open in May and has had three other top-10 finishes this season, while he also shared the halfway lead in the Irish Open before fading over the weekend.

His third round at Celtic Manor contained five birdies, three bogeys and an eagle.

The 23-year-old said: "I feel like I have been in good positions a lot this year and had some opportunities. The more I do it, the more and more comfortable I will be.

"I was much better today. I was able to slow it down and be in my own element and not get ahead of myself.

"I learnt a lot from playing with Jim Furyk in the first two rounds of the US PGA Championship [in which Furyk eventually finished second]. It was great to learn how he went about his business.

"Today, the wind was tricky but I was able to play solid and attack where I needed to. I was able to plot my way around. I am excited about tomorrow and looking forward to it."

Levet matched Uihlein's 67 as he looks to improve on a dreadful season in which his best finish from 17 events is a share of 30th place.

He won the 2011 French Open but promptly broke his leg by diving into a greenside lake in celebration.

After surging into contention at Celtic Manor he said: "I've been struggling all year, that's for sure.

"I've been fighting with my game a little bit, but the scoring was never right. My performances this year, I played much better than they show.

"My caddie has told me to stay patient, it's going to come and it's coming this week probably."