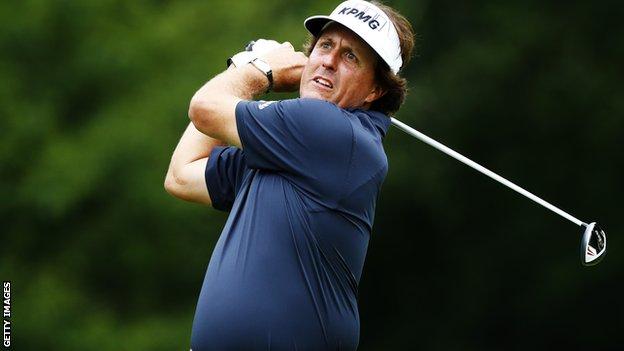 Open champion Phil Mickelson shot a 63 to share the lead with England's Brian Davis after the first round of the Deutsche Bank Championship in Boston.

The American, 43, opened his round on the back nine and reached the turn in 28, but only picked up one more shot as Davis, 39, matched him on eight under.

England's Lee Westwood and Ian Poulter are in contention after five-under 66s.

Tiger Woods carded what he called a "decent" three-under 68, while Northern Ireland's Rory McIlroy carded a 70.

Four shots cover the top 33 on the leaderboard of the second event in the FedExCup play-offs.

Davis started the tournament in 71st place and the top 70 after this weekend qualify for the third event, the BMW Championships in Chicago.

He had failed to break 70 in his previous eight rounds but he revealed that he has been playing with a foot injury after stumbling on the stairs during the Open in July.

"I busted my foot and I've been been limping for a few weeks and my body has not been feeling great," he said.

"I tried to save the dinner but it was all over the floor. It was Chinese - a right mess to clear up."

Davis birdied his final three holes, including a 25-foot putt on the last to take a share of the lead with Mickelson.

"All of my game was just really solid," he continued. "It's fun when you can play like that. It doesn't happen that often when you play that well over 18 holes".

Mickelson, who rolled in seven birdies in his first nine holes, said: "I putted really well. My ball-striking was OK, I didn't knock it down, didn't hit shots exceedingly close but what I did do is make a lot of 12-20ft putts.

"I was just giving myself reasonable opportunities and rolling them in."

Masters champion Adam Scott finished the day well down the field with a two-over 73, one behind Northern Ireland's Graeme McDowell and two adrift of England's Luke Donald.