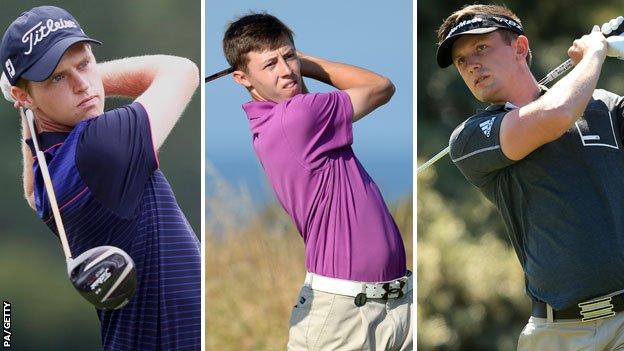 This weekend's Walker Cup offers the heady combination of golfing glory and a glimpse into the game's future.

Jack Nicklaus summed up the significance of the contest between the amateurs of United States and Great Britain and Ireland.

He said: "If golf is something that you intend to pursue, then the Walker Cup is a good place to learn a lot about yourself and about the game."

The biennial match provides the opportunity for lasting memories and the chance of claiming a place in golfing history.

England's Luke Donald went on to become the best player in the world, but only after winning appearances in 1999 and 2001. The significance of the match was certainly not lost on him.

"It meant enough to postpone turning pro and wanting to play my second Walker Cup at Sea Island," Donald said. "For me it was a big deal to make that team and represent my country. I think it's the pinnacle of amateur golf."

That 2001 contest was the last time GB and Ireland won away from home. Among Donald's team-mates were Graeme McDowell, Michael Hoey, Nick Dougherty and Marc Warren.

Also in the side was Welshman Nigel Edwards, who will perform his second stint as non-playing captain at the National Golf Links of America at Southampton, New York this weekend.

Edwards led GB & I to victory at Royal Aberdeen two years ago and firmly believes his young team can match the exploits of those a dozen years ago and defend the trophy at the course known simply as "The National".

"They've all been fantastic this summer and none of them have backed off," Edwards told BBC Sport. "They've been playing nicely and they've been winning.

"Not just winning, but winning well and all over the world."

The Sheffield youngster, who has just turned 19, also won the silver medal as the leading amateur at this year's Open at Muirfield.

Fitzpatrick has no immediate plans to turn professional and is about to follow Donald's spikemarks and embark on a college career at Northwestern in Chicago.

Amateur champion Garrick Porteous is only 23 while Ireland's Kevin Phelan, who made the cut at the US Open in June, is 22.

At 27, Neil Raymond is the "old man" of the team but still young enough to be contemplating a career in the game.

These are all names worth remembering. Edwards agrees that many have the potential to go on to glittering professional careers.

"I think so," he said. "Looking at their results you have to say so. Obviously there are no guarantees that they will go on to be successful tour professionals but there's no doubting their potential.

"They are so young - a bit younger than those who came through that Sea Island team. They were more in the 20-23 age bracket."

The captain believes it possible "four or five" of his team will remain amateur long enough to do as Donald did and have a second crack at the Walker Cup at Lytham in 2015.

"It's a bit of a rarity for that to happen in this day and age," Edwards admitted. "And some will feel the need to get out and start earning some money and see how they fare in the professional ranks."

It's also worth noting that having so many stand-out stars from the amateur game is no guarantee of success in the Walker Cup.

Just ask American skipper Jim Holtgrieve, who assembled one of the most talented US line-ups for the Royal Aberdeen contest only to go down 14-12 in a thriller.

Jordan Speith, Harris English, Russell Henley, Peter Uihlein and Patrick Cantlay have all successfully established themselves in the pro ranks despite that defeat.

Like Edwards, Holtgrieve retains the captaincy. "Everybody said we had by far the better team and that it may have been one of the greatest Walker Cup teams ever," he said.

The American skipper believes his team will be stronger in the two morning foursomes sessions because this time he has ready-made partnerships.

Max Homa and Michael Kim played with each other in California, Cory Whitsett and Bobby Wyatt won a NCAA Championship together at Alabama while Patrick Rodgers and Justin Thomas are close friends.

This doesn't worry Edwards, who already has a good idea of who will play with whom in the GB & I side.

"Obviously we have a very strong team. It doesn't really matter where they play in the order. They know what they have to do and that it is to go out and win their match. Simple as that," he said.

The skipper believes his side will draw inspiration from the way Europe's women thumped the US to retain the Solheim Cup last month. "They've all grown up with Charley Hull (17) on the scene and they will look at what she did, definitely," he said.

And in the knowledge that as well as the Solheim, the Ryder and Curtis Cups currently reside on this side of the Atlantic, Edwards added with a smile: "The lads will be suitably motivated."

Regardless of the result those competing with aspirations of turning pro will garner invaluable experience. The last six US Open champions; Justin Rose, Webb Simpson, Rory McIlroy, McDowell, Lucas Glover and Tiger Woods, all played in Walker Cups.

Like Nicklaus, Rose is able to sum up the coming weekend rather neatly: "Whether you're an American or a player from the UK or Ireland, it's the biggest event you can compete in. As an amateur, that's what you strive for."