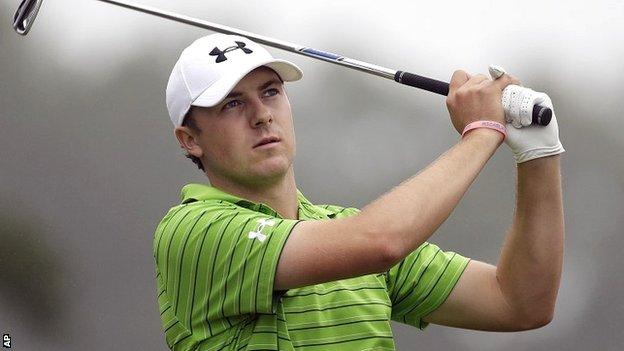 Spieth, 20, became the youngest PGA Tour winner for 82 years when he won the John Deere Classic in July.

"Can't even describe what it means to represent USA," Spieth said on Twitter.

A total of 34 matches, worth one point for each victory and half a point for drawn matches.

Day one: Six foursomes (the pairs take alternate shots and tee off at alternate holes)

Day two: Six four-balls (both players in the team play their own ball and the best score on each hole is used)

There was no place on the US team for world number 15 Jim Furyk, 43, who has been part of every US Ryder Cup and President's Cup team since 1997.

Furyk was 13th on the qualifying list after claiming six top-10 finishes, including runner-up to Jason Dufner in last month's PGA Championship.

Couples said: "I told him last night that he wasn't on the team through a text and would talk to him today, because I just couldn't handle it, to be honest."

Simpson, who won the US Open in 2012, was beaten to the last of the 10 automatic places on this year's team when former Masters champion Zach Johnson holed a 26-foot birdie putt for a share of 29th place in last week's Deutsche Bank Championship in Boston.

The 28-year-old has recorded three top-10 finishes in strokeplay events this year, including second place at the RBC Heritage in April.

Couples, captaining the team for the third time, caused controversy when he left Keegan Bradley out of his team in 2011, shortly after his US PGA victory.

Commenting on his choices for this event at the Jack Nicklaus-designed Muirfield Village, Couple said: "To pick Jordan was the right move and he is having an incredible year.

"He is one of our top players, even though he is only 20. I'm excited to have a young kid on the team.

"I left Keegan out two years ago, and that was a killer decision. He has become one of the best young players in the game. It's a team game, and everybody I talked to on the team wanted Spieth. He definitely deserves it."

The International team, comprising the rest of the world minus Europe, have won only one of the nine President Cup events since it was first played in 1994.

The Americans successfully defended the trophy with a 19-15 victory in Melbourne in November 2011.

Former Open champion Price, captaining the International side for the first time, said finalising his team "was probably one of the toughest days of my life".

"When push came to shove, it came down to who I felt is going to play Muirfield the best," he said.

Leishman, 29, whose only PGA Tour victory came at the 2012 Travelers Championship, has four-top-10s this season, including a share of fourth at the Masters.

De Jonge, 33 but yet to win on the Tour, also has four top-10s, the most notable of which came in last week's Deutsche Bank Championship.