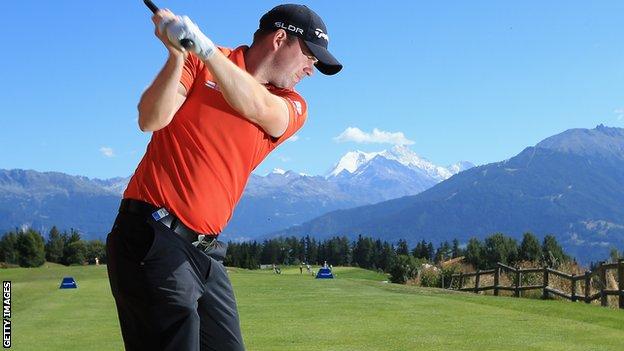 Walking down the streets again of little Crans-Montana reminded Richie Ramsay of the magnitude of .

"There were billboards with my picture on it and the biggest thing was seeing all the past champions," the Scot told the BBC ahead of this week's event.

"Seve Ballesteros, Luke Donald and Lee Westwood and those guys.

"It is an honour to have your name on the board with past champions like that."

Ramsay, who tees off in his first round at 12.20 UK time on Thursday at the Crans-sur-Sierre course, finished four strokes clear of the chasing pack last year - .

And he believes that his own golf game and the Swiss course are a good marriage.

"You walk around the course, the different shots you hit, the views, the people, the little town behind the course, it's just a beautiful place," he said.

"It is a beautiful wee town, very compact and just a great place to play golf.

"And, obviously, they've enhanced the course this year, which made it even better.

"My game's in good shape. You just need to be positive and patient on the golf course, enjoy the views on the way round and hope things come together."

Ramsay, who finished 10th at the Johnnie Walker Championship at Gleneagles two weeks ago, approves of the changes that have been made to four of the holes this year.

"They have taken this tournament to another level every year and long may it continue," he said.

"They have made small changes to enhance the course every year and it seems to be getting better and better.

"With the water hazards on 12 and 13 a lot more in play, I think the scoring is going to be a little tougher this year."

Meanwhile, Stephen Gallacher, whose uncle, , is included in the field in Switzerland.

The Scot, who has been struggling with a back injury, had pulled out of last week's Wales Open at the start of his second round - hours before the former Ryder Cup captain's medical condition was made public.