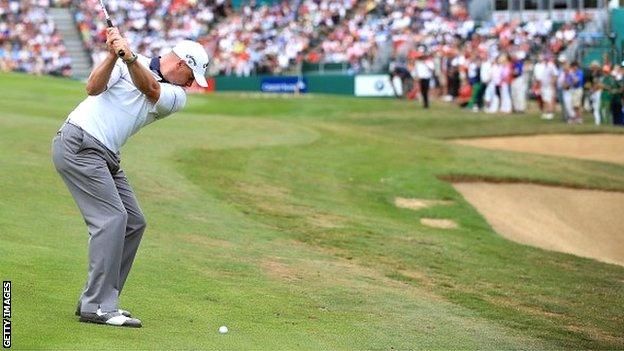 Scotsman Craig Lee came within a shot of equalling the lowest-ever official round on the European Tour at the European Masters at Crans-sur-Sierre.

The 36-year-old was in sight of the Tour's first official sub-60 round with nine birdies in his first 10 holes.

But needing to birdie the final two holes, he recorded two pars to finish with a course record 10-under-par 61.

That left Lee, yet to win on the Tour, at 16 under for the event with a two-shot lead after three rounds.

Having birdied the first six holes, Lee, the world number 348, had an excellent chance at the 331-yard seventh when he drove just short of the green, but could only make a par four.

He pitched to within two feet with a wedge at the 10th and after dropping his only shot of the round at the 12th birdied the next two holes to give himself a chance of matching or lowering the record.

At the 18th he calmly holed from six feet for a par having sent his long-range birdie effort racing past the cup.

Asked about the elusive 59 he said: "I mentioned it when we were going up 15, the par five, that a couple more could get the magic number but there really wasn't a target.

"Once you've played the second par-five it's a pretty tough finish and 59 had gone by the time I hit my second shot up the 15th.

"Six under is probably my lowest score on the European Tour and I said before it would be nice to go one better, but I didn't imagine four better."

It was the second time in the day the course record had been set at the newly refurbished 6,881-yard, par-71 lay-out, with Englishman Ross Fisher earlier posting a 63.

The 33-year-old carded a 61 at the 2010 Irish Open, which was the last of his four European titles, and he began day three with an eagle, adding four consecutive birdies from the sixth and two more on the back nine to reach 10 under for a share of seventh.

Experienced Dane Thomas Bjorn, 42, missed a six-foot birdie chance at the last but his 67 left him in a three-way share of second.

Bjorn, the world number 66, captured the last of his 13 European Tour victories at this event in 2011.

Colourful Spaniard Miguel Angel Jimenez and Englishman Tommy Fleetwood, who won his first European title in a play-off at the Johnnie Walker Championship at Gleneagles last month, are five shots off the lead after both returned rounds of 69.