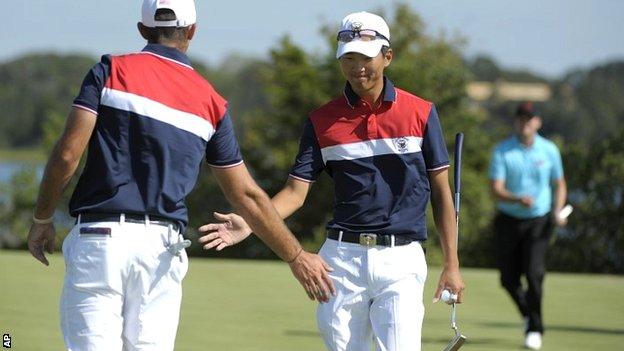 The United States regained the Walker Cup with a 17-9 victory against Great Britain and Ireland on Long Island.

Resuming 8-4 ahead after the opening day, they consolidated their position by sharing the morning foursomes 2-2.

That left just three-and-a half points needed from the 10 singles matches, and the contest was won when Nathan Smith held off Nathan Kimsey in match five.

It was the 35th US win since the top amateurs' event began in 1922, with GB and Ireland on eight wins, and one tie.

With a four-point deficit going into the singles the visitors needed some inspiration but in the opening game Neil Raymond bogeyed four holes out of five and lost all of them to Bobby Wyatt, who won their match 4&3.

Max Orrin then had two bogeys and a double bogey to lose three successive holes to Justin Thomas, who clinched a 6&4 victory with his third birdie of the round.

World amateur number one Matt Fitzpatrick, the 18-year-old from Sheffield, birdied the first two holes and earned a point for GB and Ireland with a 3&2 success against Michael Weaver, but wins for two mid-amateurs - post-college players - 45-year-old Todd White and 35-year-old Smith ensured victory for the American team.

"Everybody played so hard as a team there were no individuals here, all these guys gave their hearts and I can't say enough about them," an emotional US captain Jim Holtgrieve said.

"I think Bobby Jones and the team of 1922 are all here today and saying good things about us."

GB and Ireland counterpart Nigel Edwards admitted: "They holed out a little bit better and the short shots, the distance control, is where they did us.

"If some matches yesterday afternoon had gone our way down 18 it could have been a lot different but we needed to do the simple things well this week, people have to hole putts and we haven't holed enough putts.

"One weekend doesn't make them bad golfers, hopefully we'll have a few available for two years' time, the ones who turn pro I'm sure they'll learn from this."

The next edition of the Walker Cup will be played at Royal Lytham and St Annes in September 2015.