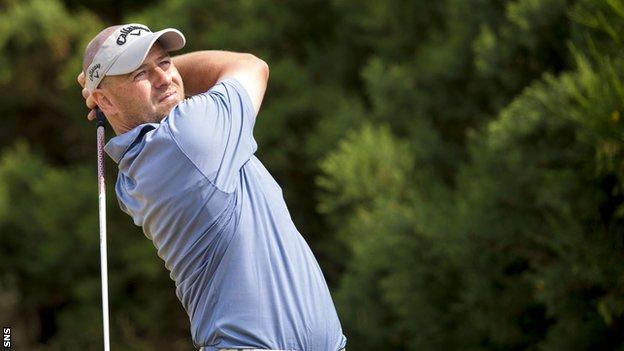 Scotland's Craig Lee would have gladly accepted being runner-up at the European Masters had he been offered that finishing position in advance.

Lee narrowly missed out on a first European Tour title after both having finished 20 under par.

"I would certainly have taken second place before the week started and even after the first round," said Lee, 36.

"I'm delighted with my performance at the end."

Two ahead by the turn on the final day, Bjorn shot a 65 to finish 20 under, a total matched by overnight leader Lee, the Stirling-based player adding a 67 to Saturday's course-record 61.

Bjorn, 42, birdied the first extra hole to secure his 14th title and move back into the top 50 in the world rankings.

Over the last three years, it's gradually got better and better

Lee realised a late surge could win him the title when he noticed no player was emerging as a clear victory on the final day.

"The putter was pretty cold on the first nine, but nobody was really running away from it," said Lee, who opened the tournament with a 71.

"Obviously, Thomas made a charge early on, but he didn't capitalise on the two par fives, so that let me back in a bit.

"I dug deep and birdied the two par fives myself and gave myself a chance coming down the last.

"I just lipped out [with a birdie putt at 18] in regulation time and Thomas made a brilliant three in the play-off."

The second-place prize money means Lee has already earned more than double on the European Tour this year than in 2012.

And he says the improvement is down to hard work from his team.

"Over the last three years, it's gradually got better and better," said Lee. "We're obviously working on the right things now.

"The team behind me - my physio, my masseuse and my coach - we're all working pretty hard to get the fine points tuned in.

"We're on the right lines and we're pleased with the way things are going."