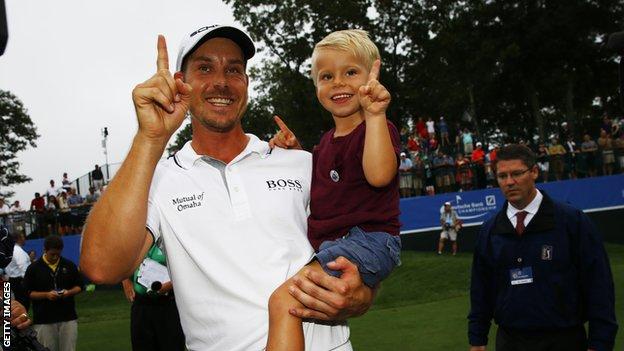 Money can often be thrown in the direction those who need it least. That's certainly the way of the golfing world.

How else do you reconcile some of the world's wealthiest sportsmen spending the next fortnight competing to add a further millions to already burgeoning bank accounts?

It is tempting to regard the PGA Tour's play-offs as being more about money than glory, but resist that temptation.

There is sporting merit to the current series that culminates with the Tour Championship and the division of $35m (£22.3m) worth of FedEx Cup spoils.

Pro golf has always been about money and right now the elite can command it by the shedload.

Furthermore, this year there is even room for a little romance with Henrik Stenson leading the chase for the $10m (£6.4m) jackpot.

It is hard to think of a more deserving recipient of golf's biggest cheque, however. The 37-year-old Swede has been the story of the summer.

Since finishing joint-third at the Scottish Open he has been runner-up at the Open and WGC Bridgestone Championship. Then he was third at the US PGA before last week completing victory at the Deutsche Bank event in Boston.

That was the second of the three play-off tournaments which decide the 30-man field for the season-ending Tour Championship.

Stenson leads this dash for the cash having climbed 224 places in the world rankings over the last 19 months. The current world number six only broke back into the top 50 as recently as April.

And here is the romance bit, because Stenson's preceding tumble to 230th in the world was triggered largely by money worries.

A significant portion of his previously accrued wealth was lost in the 2009 collapse of the Allen Stanford financial empire.

Stenson was one of the victims of his $7bn (£4.5bn) Ponzi scheme and soon wasn't just wondering where his money had gone - he'd also lost his golf swing.

Most ranges weren't wide enough to accommodate his errant drives.

"It was frustrating times, of course," Stenson admits.

"But I never questioned my ability to play good golf and compete with the best."

This was a player who had fired a sublime 66 in the final round of the 2009 Players' Championship to claim the biggest title of his career to date.

That Sawgrass victory lifted him to number four in the world but it wasn't long before the impact of falling victim to Stanford fully hit home and his game unravelled.

Initially he sought to plaster over the cracks.

With hindsight, though, he admits that "playing good golf again has been more a long-term process rather than going for a quick fix."

Stenson won the South African Open at the end of 2012 to bounce back into the world's top 100. Then a runner-up finish at the Houston Open put him in the top 50 just in time for the Masters.

Even then it was hard to predict the elevated standards that lay ahead.

"I think mentally I've been as good as I've ever been throughout this summer, and that kind of started in my preparations for US Open," he said.

"You've got to be able to take the hits there and keep on going."

Stenson finished 21st behind Justin Rose at Merion. "I did pretty good that week, but I knew I could be better.

"I just kept at it all summer. And that's the big reason to why I've been able to have so many good weeks in big tournaments," he said.

After his win in Boston, Stenson admitted to exhaustion but by last weekend he was back on the range toiling under the tutelage of long-time coach Pete Cowen.

"He's a worker, there's no doubt about that," Cowen told BBC Sport. "He was at it in 94 degrees of heat in Florida (34C) because he's convinced there's more to come.

"He won in Boston at 22 under par, but Henrik still felt that he could do better. He might be top in 'greens in regulation' and playing the best golf but he thinks he's still only 70-80% of his capability so he wants to push on."

Cowen believes Stenson could become golf's next dominant figure. "I would say that, of course, because I'm his coach. But he has got the full package. Mentally he's a winner so there is that potential.

"He has to make sure he doesn't go back to messing about and thinking there's quick fixes around the corner and keep committed to the process.

"You also have to give massive credit to his caddie Gareth Lord. He's the one out there encouraging him to have a go with the driver, telling him that if he can launch it 330 yards down the fairway he might as well use it," Cowen added.

This week Stenson goes into the BMW Championship, held at the stunning Conway Farms course in Chicago from 12-15 September, for the first time.

Luke Donald is a member and needs to make use of local knowledge to secure the high finish he needs to make the top 30 for Atlanta the following week.

There are no such pressures for Stenson, though.

"I've always been a pretty good front-runner," he said.

"I always liked to think that the other guy is going to have to play better than I do, if I'm in the lead."

Even for those who find the huge sums involved unpalatable, the next two weeks carry a fascinating sporting dynamic with the Swede leading Tiger Woods in the standings.

And justifying a $10m cheque going to a single golfer would be that bit easier should it bear the name of Henrik Stenson.