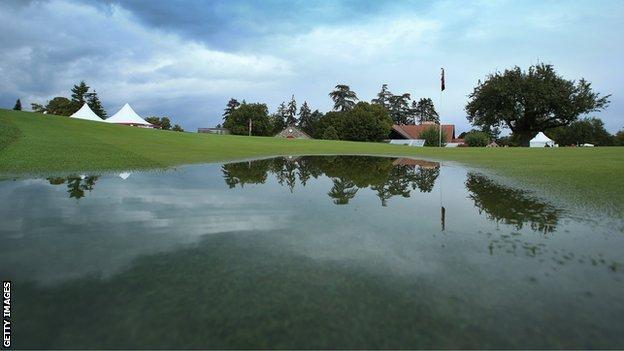 Play was abandoned on the first day of the Evian Championship - the inaugural fifth major of the LPGA season - after four inches of rain made the course in south-east France unplayable.

After a two-hour delay, play began at 9.45am local time (08:45 BST) but was suspended at 10.32am and then abandoned shortly before midday.

Only 15 players started their rounds, and their scores will be wiped clean.

Weather permitting, the first round will now start at 7.45am on Friday.

The second round will now take place on Saturday, followed by the cut, with the aim of playing both the third and fourth rounds on Sunday to complete a full 72-hole tournament.

It is the first year in which the event - at Evian-les-Bains on the shores of Lake Geneva - has been elevated to major status, but almost four inches of rain put paid to Thursday's play.

LPGA senior vice-president of tour operations Heather Daly Donofrio said: "We had the situation where we would squeegee a path for the player to putt and the water would come back up before they could execute their shot."

United States player Cindy Lacrosse, who was leading at one under after her first hole before the stats were wiped out, added: "The greens just couldn't hold that much water and the right decision was made - unfortunately for me. Hopefully tomorrow is better."

World number one Inbee Park is bidding to become the first golfer to win four majors in a calendar year after triumphing in the Kraft Nabisco Championship, LPGA Championship and US Women's Open, though she finished well down the field in 42nd at the Women's British Open in August.

No player - male or female - has ever won four majors in a calendar year, although Tiger Woods held all four men's major titles simultaneously for part of 2001.