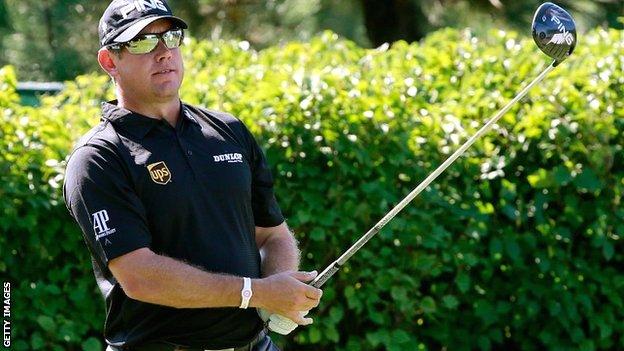 Former world number one Lee Westwood slumped to a nine-over-par 80 after back and neck trouble in round one of the BMW Championship in Illinois.

The 40-year-old, needing a top-14 finish to qualify for next week's Tour Championship, shares 69th place.

Last year's FedEx champion Brandt Snedeker had seven successive birdies and leads by one at eight under. Tiger Woods is joint third, three shots back.

With no halfway cut in the 70-man event, Westwood, who had seven bogeys and a double bogey, could still battle back.

He said on Twitter: "Shouldn't really play injured but everybody wants to play the Tour Championship. Give it a night to see if my neck & back settle down."

Defending champion McIlroy, without a win since the World Tour Championship in November last year, began his round at the 10th hole and had a double bogey at his second and a triple bogey seven at his 10th.

Woods also began at the 10th and after putting his tee shot at the par-three 17th to five feet he went even closer at the next short hole, the second, pitching to within a foot for a tap-in birdie.

The world number one saw several short putts stay above ground, however, and was unable to birdie any of the three par-fives.

"I certainly wasted a lot of shots out there today," he admitted. "One of those days. I played well, and I just didn't get much out of that round."

Next week at the Tour Championship in Atlanta, Snedeker will attempt to be the first man to claim the $10m (£6.3m) FedEx Cup prize two years running and could find himself at the top of the standings going into the season-ending event after posting eight birdies on the opening day at Lake Forrest.

Points on offer this week

They included a 40-foot putt from the back fringe of the green at the par-three 17th, his eighth hole of the day.

"It was one of those days where everything seemed to go right in the middle of the round," said the 32-year-old American, who needed only 22 putts.

Westwood's fellow Englishman Luke Donald, a member at the Conway Farms course for more than a decade, needs to be in the top four this week to prolong his record of appearing in every Tour Championship since 2009 and started with three birdies in a 70 for a share of 18th place.

That was matched by Open champion Phil Mickelson, who chipped in from thick rough around the green during a run of three consecutive birdies on the back nine.

Former US Open winner Graeme McDowell needs to finish fifth or better to qualify for Atlanta next week and was another to finish with 70 after mixing six birdies and five dropped shots.

England's Ian Poulter - needing the same finish as the Northern Irishman - began with a two-over 73 after dropping three shots in a row from the eighth.