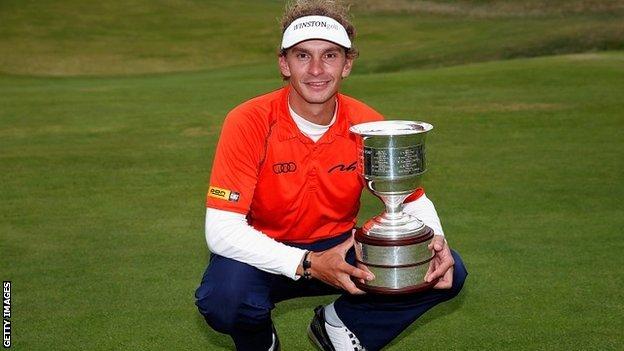 The pair finished on 12 under after rounds of 68 and 67 respectively, before Luiten won with a par at the first extra hole at Kennemer.

The 27-year-old Luiten grabbed his second win of the season and third European Tour title in all, and is the first home winner for a decade.

Jimenez, 49, was bidding to extend his record as the oldest Tour winner.

The colourful Malagan, who won this title 19 years ago, became the oldest champion when he won the Hong Kong Open last November at the age of 48 and 318 days.

Luiten began the day with a one-shot lead over Jimenez but the Spaniard, who broke his leg in a skiing accident this winter, made four birdies in his first six holes to edge in front.

Jimenez led by two after 13 but a Luiten birdie at the 14th to Jimenez's dropped shot at 15 brought them level before both bogeyed the 17th and parred the last to force the play-off.

"I don't know what it means for Dutch golf but I think it's pretty big," Luiten said. "Maarten Lafeber won it in 2003 and that was huge, and to have another Dutch winner now I think it will help the game here and hopefully we can create more Dutch winners for this tournament.

"I can't believe it yet, it's unbelievable. I think tonight it will hit me."