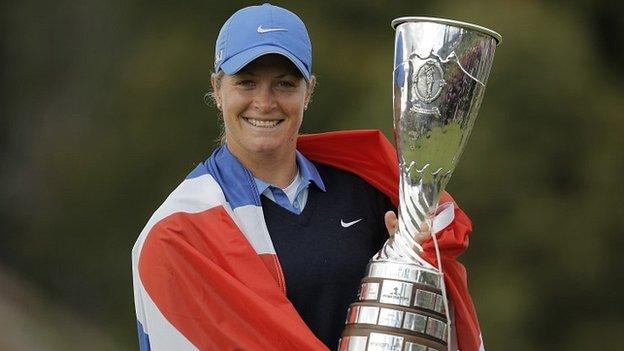 Norway's Suzann Pettersen clinched the fifth and final women's major of 2013 with a two-shot victory in the 54-hole Evian Championship in France.

The 32-year-old won the second major of her career with a final-round 68 to overhaul New Zealand's Lydia Ko, 16, after heavy rain washed out day one.

Amateur Ko shot 70, while American Lexi Thompson (68) was third at six under.

South Korea's Park Inbee, bidding for a fourth major of the year, finished on eight over after a 76.

"It's great to win another major and this one has definitely been well worth waiting for," said Pettersen, who won the LPGA Championship in 2007 and has been second in four other majors.

"I was actually really nervous coming down the stretch and even nearly played up short at the 18th (a par four over water). But I said to my caddie I had to go for it and it worked out."

Pettersen began the day tied with Ko, one shot behind Japan's Mika Miyazato.

But Miyazato collapsed to a 79, leaving Pettersen and Ko, already a four-time winner in the paid ranks, to battle it out.

Pettersen, who helped Europe to Solheim Cup victory last month, had two birdies in her first three holes before handing a shot back at the seventh.

But a birdie at the eighth gave her back the lead, and when Ko bogeyed the 13th the Norwegian was clear by two.

They both birdied the 15th but Pettersen suffered a scare on the par-four 17th when she drove into trees and had to chip out sideways.

But a third to four feet to save par kept her in front to the finish.

This was the first time the Evian Championship has been given major status.