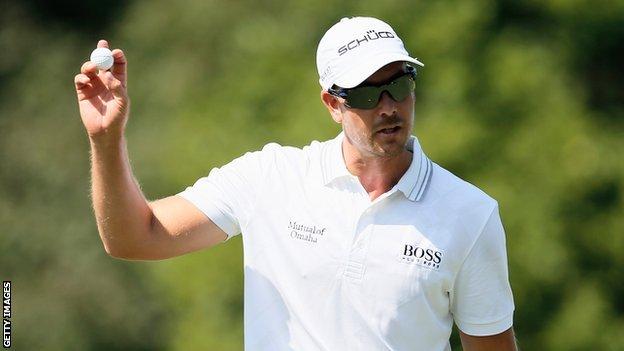 The world number six had a run of four birdies on the East Lake course and after a bogey on the 16th, he birdied the last to lead Adam Scott by one.

Justin Rose is two under while fellow Englishman Luke Donald is level par.

The 30-man field is competing for the $10m (£6.24m) bonus prize for winning the FedEx Cup - Tiger Woods leads the points going into this final event.

However, the world number one, who is guaranteed to win the pot if he is victorious, opened with a three-over par 73.

It was the American's first round without a birdie since the 2010 US Open and he is 29th.

Four other golfers are guaranteed to take the $10m prize if they win the event - which itself carries a first prize of $1.4m (£875,000) - Stenson, Scott, Zach Johnson and Matt Kuchar.

Johnson and Kuchar both shot rounds of 69 to lie one under but it was 37-year-old Stenson who made the best start, holing from seven feet at the second, eight inches on the fourth and four feet on the fifth to race to three under.

An accurate tee shot on the par-three sixth left him with another tap-in birdie before an eight-foot putt on the seventh and a birdie on the par-five 15th took him to six under.

Stenson's performance came just three days after he knocked the head off his driver by smashing into the ground in frustration towards the end of his rain-delayed final round in the BMW Championship on Monday and then damaged his locker.

Stenson paid for the damage and "apologised to the appropriate parties".

Australia's Masters champion Scott sank six birdies in seven holes from the 10th to shoot up the leaderboard and finish on five under, one shot ahead of American duo Billy Horschel and Steve Stricker.

An eight-strong group containing Rose, Spain's Sergio Garcia and American Dustin Johnson are in touch at two under.