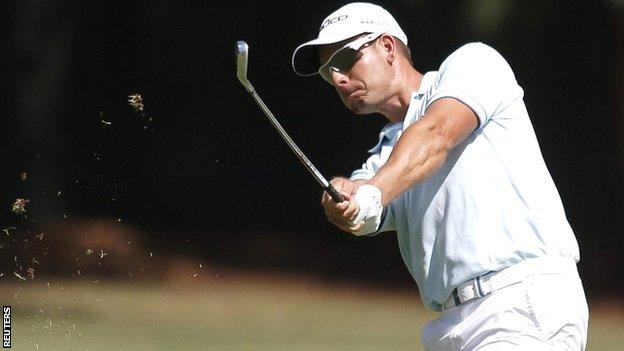 Sweden's Henrik Stenson is on course for the $10m FedEx Cup bonus as a 66 gave him a four-shot halfway lead at the Tour Championship in Atlanta.

The 37-year-old resumed a stroke clear and sank five birdies to end 10 under.

Masters champion Adam Scott remains second after a 69 - and he and Stenson are two of five players who can claim the bonus with a victory.

World number one and FedEx leader Tiger Woods had five birdies, but six dropped shots in four holes left him four over.

That 73 put him in a tie for 26th place but Woods - who has won five times this season and is seeking to land the FedEx Cup for a third time - could still claim the big prize by finishing as low as 29th in the 30-man field.

In the opening round, the 37-year-old failed to make a birdie for the first time since the 2010 US Open but began well on day two and was two under through 13 holes.

However, his tee shot settled amid the Georgia pines left of the 14th fairway leading to double bogey, another shot went at the 16th and he found the water on the 17th for a triple bogey.

It added up to Woods returning consecutive over par rounds in a PGA Tour event for the first time time since the 2011 PGA Championship.

"I put everything I had into that start and didn't have much at the end," he said. "Just ran out of gas. My legs were just tired. It's been just a long, long grind.

"I'm still in contention," he added. "There's 36 holes. This is not a sprint, it's tournament golf. It's a marathon. You've got to keep plugging around."

Stenson, who won the Deutsche Bank Championship in Boston, the second of the four FedEx Cup play-off events, made a superb start to round two at the East Lake Golf Club.

His opening approach finished within six feet and he put his tee shot at the par three second to a similar distance for another birdie.

A third birdie arrived at the fourth when he holed from the edge of the green - and even when his tee shot came within inches of the water at the island green par-three sixth, the world number six was still able to salvage par.

He chipped up to four feet to birdie the par-five ninth, added another from 20 feet at the 16th, and dropped only one shot at 10.

Scott, winner of this year's opening FedEx play-off event, The Barclays in New Jersey, bogeyed the first after a wayward drive but had three birdies.

Of the two other players for whom victory would secure the bonus, former Masters champion Zach Johnson had a bogey-free 68 to share seventh at three under, while Matt Kuchar slipped to three over and 25th place after five dropped shots in a 74.

US Open champion Justin Rose - who needs to win the tournament and see Woods and Stenson finish outside the top two to claim the $10m - shot a second successive 68 for four under and a share of fourth.