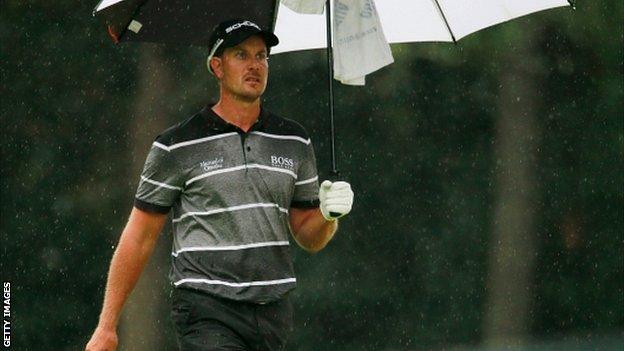 Henrik Stenson will head into the final day of the Tour Championship with a four-stroke lead but offered his rivals some hope in a rain-hit third round.

The Swede, 37, was nine shots clear at the turn but four bogeys on the back nine brought him back to 11 under.

However, Stenson remains in position to win both the tournament and the $10m (£6.2m) bonus for the FedEx Cup winner.

Dustin Johnson shot 67 to move into second on seven under, with fellow American Steve Stricker on five under.

England's Justin Rose moved to four under with a level-par round, while Luke Donald went to three under (67).

Australia's Masters champion Adam Scott had been second overnight but struggled to a 74 that left him two under par.

Tiger Woods, the world number one and FedEx Cup leader, was already out of contention in terms of winning the tournament after his first two rounds, but improved to a 69 that left him tied for 26th on three over.

"I didn't hit it very good today," said the American. "I hit everything to the right or flipped it left, but I putted better.

"As I said yesterday, that was the difference. I hit the best the first day and made nothing and putted better the last two days."

Sunday's winner will earn $1.4m (£875,000), and Stenson is in line to also collect the $10m FedEx Cup bonus as he currently lies second in the standings behind Woods.

Birdies on the second, third, seventh and ninth had taken the world number six to 14 under par, nine shots ahead of Johnson, but as heavy rain began to fall, bogeys at the 10th, 14th and 16th were followed by a three-putt on 18.

"I've got to take the positives still," said Stenson.

"It was tough conditions on the back nine and I hit a couple of wayward shots and it's hard to find your rhythm again when you are out in very much European conditions.

"The only one which stings a little is the three-putt on the last; I hit a very nice first putt and looked like I almost made it but missed the one coming back. I still have my four-shot lead and I'm going to go out and try to play well again.

"I lost my feel a little bit on the back nine. Hopefully we have a nice day tomorrow and I can start in the same form as I have the other rounds."