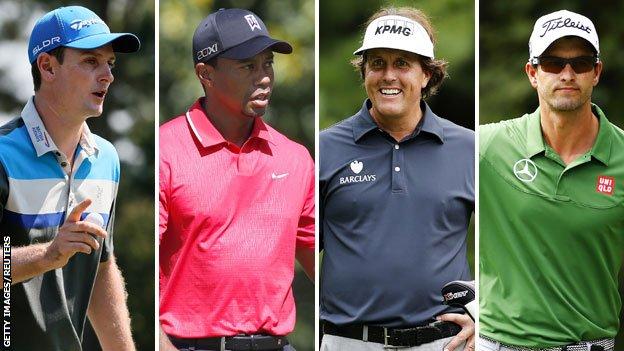 Envelopes will start to fall through front doors of PGA Tour players' mansions this week containing ballot papers for the 2013 Player of the Year.

It is an award of great prestige. "We hold it dearly because it's the respect of our peers," said Tiger Woods.

"Having a year where they think that you were deserving of the player of the year is pretty special."

Woods will be in the thick of the voting again but this year provides an intriguing choice for the players based on the American circuit.

By anyone's standards, the world number one has had a fine season with five victories. But none of those came in the majors - the championships he most wants to win.

Woods' chief rivals are the champions at the Open and the Masters. Both Phil Mickelson and Adam Scott are multiple winners this season and claimed majors of great resonance.

Justin Rose's US Open win was also a landmark victory, but the first Englishman to claim America's national championship in 39 years has not done enough in the rest of the season to warrant consideration.

Rose, though, will be favourite for the European Tour's version of the award when it is considered in December.

Mickelson won the tournament that many, including himself, thought beyond him. "Lefty" had to learn links golf and at a sunbaked Muirfield thrillingly prevailed in the most "linksy" conditions in recent memory.

It came in the wake of agonising defeat at the US Open and victory in the Scottish Open at Castle Stuart. He also won in Phoenix and was tied for third in the World Golf Championships event at Doral.

It is an impressive resume, as is the one that belongs to Scott who became the first Australian to win the Masters. He also won the Barclays play-off tournament, was third at the Open and at Doral, as well as contending in the PGA Championship.

Last week's Tour Championship would have proved the decider, but none of Scott, Mickelson or Woods could force the issue in the Tour's multi-million-dollar finale.

Henrik Stenson's sublime summer culminating in victories at East Lake and the FedEx Cup also makes him worthy of some consideration.

Ultimately, though, his two wins (Tour Championship and Deutsche Bank) do not stand up to the five triumphs which Woods can boast.

They came in big events: The Players Championship and two WGCs at Doral and Akron. These are places he has won at before, and the same applies to his victories at Bay Hill and Torrey Pines.

But that should not diminish from the level of achievement. It is only because of Woods' sustained excellence over the years that we are perhaps less impressed.

Five victories set him apart in the class of 2013. "I think it's been a pretty good year," he says.

"I'm excited the way I've put together my last couple of years and coming off the injuries. A lot of people though I would never win again and here we are with some more wins."

Woods' most recent brush with rules officials might prove his biggest obstacle to claiming the award for a record 11th time.

When HD cameras showed his ball had fractionally moved during the BMW Championship in Chicago a couple of weeks ago, he was handed a two-stroke penalty in his second round.

Woods contended that the ball only oscillated, and argued his case vehemently with highly respected referee Slugger White.

The fact that he did not readily accept the television evidence and move on was not well received in the locker room.

Many of Woods' peers believe he was exerting undue influence to try to make the ruling go his way.

Will that dim view be reflected on the ballot papers? Possibly, but dispassionate assessment points to the vote going his way.

Any other player assembling his line-up of wins would be a shoo-in for the award.

Woods has already claimed gongs for winning the 2013 money list and had the stroke average title all but sown up heading into the Tour Championship.

It might not have been his greatest season, but Tiger Woods was still the PGA Tour's player of the year.