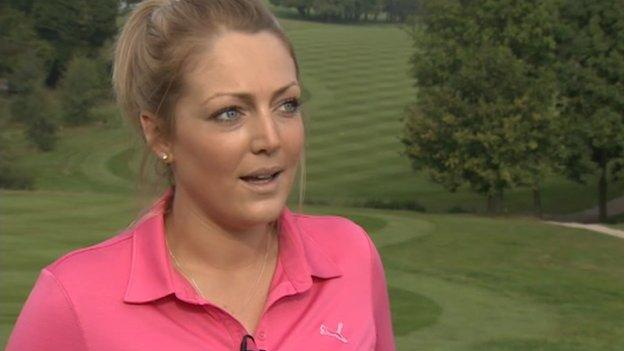 Amateur Hannah Moul is hopeful competing on her home course with former US Open champion Alison Nicholas can resurrect her career.

Essex's Moul, 25, has returned from a self-imposed four-year exile from golf.

And she will compete at Stoke-by-Nayland's WPGA International Challenge this week alongside 100 professionals.

"If you said at the beginning of this year that I would be playing in this event here I wouldn't have believed you," she told BBC Look East.

Moul, the sister of European Tour player and former world number one amateur Jamie, added: "I played full-time amateur golf from when I left school at 16 and did that for four years.

"I don't know what happened really. I just lost the motivation to get up and practice every day. I wanted to be at home and be a normal 20-year-old.

"Looking back I should have stuck at it but didn't have the passion. This January after four years I picked the clubs up again and haven't looked back since."

The event on the course straddling the Suffolk-Essex border is part of the Ladies European Tour Access Series, designed to give amateurs experience of playing with professionals.

There are tour places up for grabs for the highest rankers and Nicholas, who won the British Open in 1987 and the US Open a decade later, before captaining Europe to Solheim Cup victory in 2011, has backed the scheme.

"It's massive. They need things to play in. It's the only way you get better," said the 51-year-old.

"It's an opportunity for these girls to get better and get on tour."