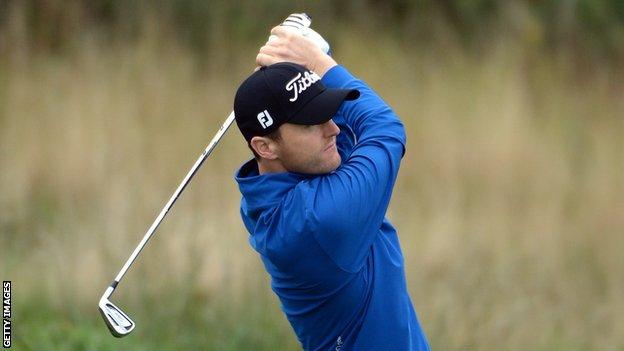 2011 winner Michael Hoey made a fine start at the Dunhill Links Championship as his opening 68 at Carnoustie left him four behind the leaders.

Hoey, playing the toughest of the event's three venues, had an early eagle before a second-nine burst of five straight birdies.

Darren Clarke also performed well as he shot a 69 at Carnoustie.

Gareth Maybin has work to do after a level-par 72 at Kingsbarns which is probably this week's easiest venue.

The lead was held on eight under by five players.

Oliver Wilson, recent runner-up in the Northern Ireland Open Challenge Tour event at Galgorm, showed further signs of a return to form as he shot a 64 at Kingsbarns.

Wilson's 64 was matched at the venue by Tom Lewis while Chile's Mark Tullo, Frenchman Alexandre Kaleka and England's Richard McEvoy all managed the same score at St Andrews.

This season's Russian Open winner Hoey was joint top Irishman with Shane Lowry who fired a 68 at Kingbarns.

Clarke was three under at the turn in his round and mixed three birdies with as many bogeys on the back nine which including his closing gain at the last as he holed from 20 feet.

European Ryder Cup captain Paul McGinley shot a 70 at Carnoustie but finished in disappointing fashion after bogeys at the 16th and 17th.

Simon Thornton maintained his decent form of last week in Italy as he shot a 69 at Kingbarns but Maybin struggled to get much going in his low-key round with two birdies cancelled out by the same amount of dropped shots.

Italian Open runner-up from last weekend David Higgins could also only manage a 72 at Kingbarns while Peter Lawrie fired a one-over 73 at Carnoustie.

Damien McGrane struggled to a 75 at Carnoustie while Padraig Harrington's 2013 woes continued as he carded a 76 at the same venue.

Playing on the course where he landed his first Open win in 2007, Harrington could only manage a solitary birdie with his round also including a double bogey at the 12th and two closing bogeys.