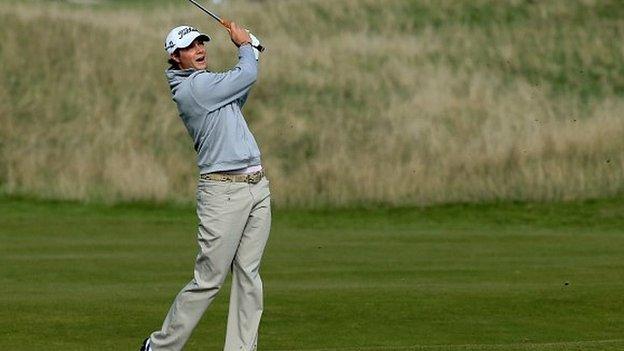 American Peter Uihlein followed up his round of 60 by chipping in at the last for a 65 to lead on day three of the Alfred Dunhill Links event in Scotland.

The 24-year-old, playing at St Andrews, reached 20 under for a two-shot lead over a group of six players.

Argentina's Ricardo Gonzalez ended one further back in the pro-am tournament.

Uihlein missed becoming the first player to shoot 59 on the European Tour when he failed to sink a long eagle putt on his last hole - the par-five ninth at Kingsbarns - to card a course record-equalling 60 on Friday.

Who is Peter Uihlein?

On a calm day on the Old Course, he birdied the second and added four straight birdies from the fifth to go out in 31, and swapped two birdies for two bogeys coming home before holing out for an eagle on the 18th.

"I wasn't quite sure what I was going to do with my second shot but it worked out well and when I saw it go in, it was pretty sweet and a nice way to sign off," said Uihlein, who won his maiden title in Madeira in May.

"And to play the Old Course for a first time was awesome and it's one of the best, if not the best golf course in the world."

Howell, who won the last of his four European Tour titles in 2006, also fired an eagle at the fifth but thought he had shot 64 until adding up his scores at the end.

McEvoy compiled his 67 at Kingsbarns and Lowry carded 64 at Carnoustie.

England's Tom Lewis, who led by one overnight, took 73 at Carnoustie to slip back into a share of 19th at 14 under.

Another Englishman, Paul Casey, equalled the Old Course record with a 10-under 62 but was seven shots behind in a tie for 25th overall.

The Alfred Dunhill Championship is a pro-am event in which players alternate between three courses over the first three days, before the top 60 pros, and those tied for 60th, and the top 20 teams compete at St Andrews on Sunday.