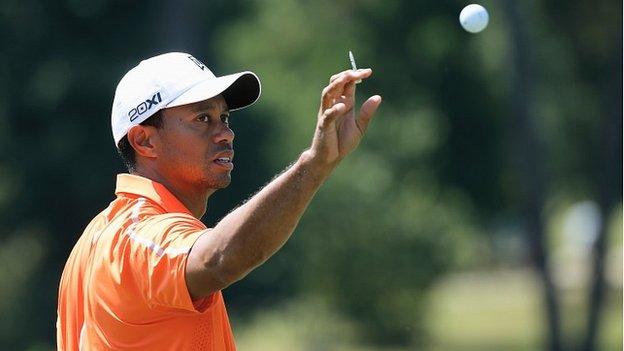 Tiger Woods was named as the PGA Tour's Player of the Year for a record 11th time with fellow American Jordan Spieth voted rookie of the year.

Votes were cast by fellow tour members who played in at least 12 official money events in 2013.

"The member vote reflects the respect their peers have for both players," said PGA Tour commissioner Tim Finchem.

He failed to add to his 14 major titles for a fifth year, finishing tied for fourth at the Masters, tied for 32nd at the US Open, tied for sixth at the Open and equal 40th in the US PGA Championship.

But he said winning the award was a special achievement after fighting back from knee and back ailments to thrive again on the tour.

"I've had to work my way back from injuries on numerous occasions throughout the years," said Woods, who was also second behind Sweden's Henrik Stenson in the FedEx Cup series. "These last couple years is no exception to that.

"There were a lot of people saying I could never win again, and two years later I've got eight wins on our tour. I'm very proud of where I've come from, from being ranked outside the top 50 to being ranked where I am now, and to have had the success that I've had this year just makes it all the more rewarding."

Spieth began the year with no PGA Tour status yet entered 23 events and won the John Deere Classic in July at 19 years, 11 months and 18 days.

The former college standout finished 10th on the money list with just under $4m (£2.5m) in prize money as he recorded nine top-10 finishes, tied for the most on tour, and was made a captain's pick for the 2013 Presidents Cup.

"I don't know if it's a pinch-me moment yet. I think my mind is still really on next week," Spieth said about the upcoming Presidents Cup.

"I haven't really had time to sit back and think about it. But with no status was hard to expect or think about something like this happening.

"I have confidence in myself...to get the job done. Just the way the year ran, the way it happened, I feel very fortunate, very blessed. A lot of luck involved."