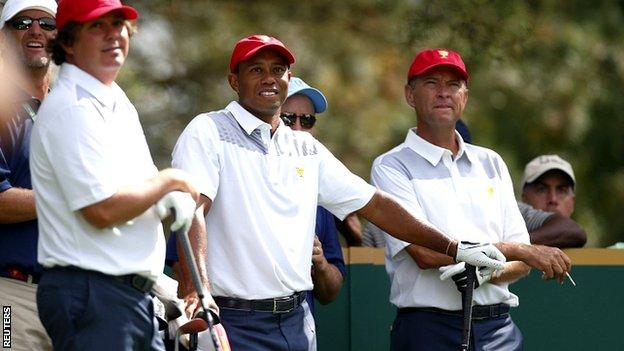 The United States will begin the Presidents Cup as strong favourites on Thursday with six of the world's top 10 players facing the International team.

Tiger Woods and Phil Mickelson are in the 12-strong US line-up, while world number two Adam Scott and 16th-ranked Jason Day lead the Internationals.

The US will be going for a fifth win in a row at Muirfield Village, Ohio.

"Because every player has to play every day, I think our depth helps," said world number one Woods.

"We are not just top-loaded and I think that certainly has helped us in the Presidents Cups over the years."

He added: "One of the reasons why our record is pretty good in this event is that if you look at the top 10 guys [on the team], they are ranked pretty high, generally in the top 10 in the world, maybe top 25, all 10 guys, and sometimes even 12 guys."

The tournament sees a combination of four-ball and foursome matches played over the first three days, concluding in 12 singles matches on Sunday.

"Maybe it's harder for us to be more united as a team [but] I don't believe that for one minute. We all don't like getting beaten. This is, to all of us, a really big week."

US captain Fred Couples insisted his players are as focused going into the tournament as they are ahead of any other event.

"It's intense," he said. "Guys are not running around laughing and giggling when they hit poor shots. They are all competitors. They are all trying as hard as they can.

"They are ready to go and they are excited."

Masters champion Adam Scott has played in the event five times but has yet to be on a winning Internationals team.

"It's really important for the Internationals to win and just for myself, for my own satisfaction, of being on a winning team, which I haven't done in my career," said the Australian.

"I really want to experience that elation with a bunch of other guys around me that have put in all that effort for the week. I'm looking forward to that opportunity."

European players get their chance to experience the team format at the Seve Trophy, which begins on Thursday at Saint-Nom-la-Breteche in France.

Scotland's saying: "I would walk to Paris to play."

"This tournament means a lot to me for reasons that I think everyone knows," said Olazabal, a close friend of Seve Ballesteros, who died from brain cancer in 2011 at the age of 54.

"It is a competition that was very close to Seve's heart and something that meant a lot to him.

"But it won't change the relationship between the players. That is the beauty of this game - we will give everything we have on the course, but once it is over we will shake hands and be friends.

"That's what Seve would have wanted."