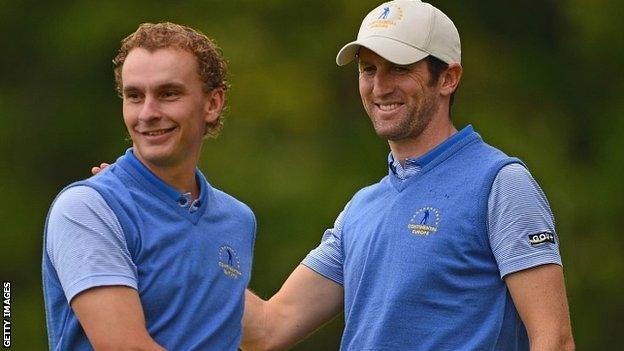 Continental Europe secured a 3½-1½ lead after day one of the Seve Trophy as Jose Maria Olazabal's side look to end a run of six straight defeats.

Paul Lawrie and Stephen Gallacher beat veteran duo Miguel Angel Jimenez and Thomas Bjorn 3&2 in fourballs to give Great Britain and Ireland an early lead at St-Nom-La-Breteche in France.

However, Europe went on to win three and halve the other to lead by two.

After Lawrie and Gallacher put the visitors ahead, Gonzalo Fernandez-Castano and Nicolas Colsaerts beat Marc Warren and Scott Jamieson 5&3 to level the scores.

Mikko Ilonen and Thorbjorn Olesen survived a nervy finish to defeat Tommy Fleetwood and Chris Wood on the 18th, ending Wood's unbeaten record in the event.

Francesco Molinari then birdied the last to ensure he and Matteo Manassero snatched a half against Paul Casey and Simon Khan, before Luiten and Bourdy beat Jamie Donaldson and David Lynn.

Asked what pleased him the most about the day, Olazabal said: "The way the youngsters played. Joost played extraordinarily well and made a bunch of birdies, Thorbjorn also played very well.

"It was a great experience for them but the main thing is to win points and I think the team is really happy."

"You put your best match out first and they stood up to be counted with a great win, Fleetwood and Wood had a great comeback and that could have gone either way.

Friday will feature five matches of fourballs before 10 matches on Saturday and then the final day of singles play.