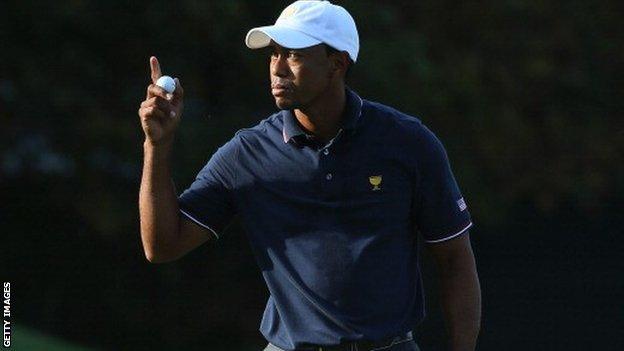 The United States ended the opening day of the Presidents Cup at Muirfield Village in the ascendancy, taking a 3½-2½ lead over the International team.

Steve Stricker and Jordan Spieth won the final fourball of the day to give the defending champions the edge.

The first day in Ohio had been hampered by bad weather, with play suspended because of a threat of lightning.

Earlier, Tiger Woods and Matt Kuchar and Zach Johnson and Jason Dufner had won their fourball matches for the US.

Woods and Kuchar earned the first point of the day for the home side, outplaying Argentina's Angel Cabrera and Australian Marc Leishman 5&4 in a match they led from the opening hole.

"We ham-and-egged it pretty good," said Woods. "Kuch made a bunch of putts on the front nine, I got it rolling there for a little bit and on the back nine. It was him or me on each hole."

At one point, the Americans led in all six encounters but Louis Oosthuizen and Charl Schwartzel inspired a fightback by the Internationals.

The United States have dominated the Presidents Cup by winning seven times in nine editions, most recently with a 19-15 victory at Royal Melbourne Golf Club in Australia two years ago.

The South Africans, who briefly donned garish wigs on the first tee, came from two down after seven holes to beat Open champion Phil Mickelson and Keegan Bradley 2&1 in a contest of high quality involving four former major winners.

"We knew it was going to be difficult, Keegan and Phil are a great team," said 2010 Open winner Oosthuizen.

"I think the break did us all really well," he added, referring to a thunderstorm delay of just under an hour-and-a-half which effectively stalled the early American momentum. "We came back out and felt refreshed."

Australian Jason Day sank a 22-foot birdie putt at the last to seal a 1-up win in tandem with Canada's Graham DeLaet over Hunter Mahan and Brandt Snedeker, after they had been three down after six holes.

Masters champion Adam Scott of Australia and Japan's Hideki Matsuyama, who never led and trailed by two with four holes to play, fought back to square their match against Bill Haas and Webb Simpson.