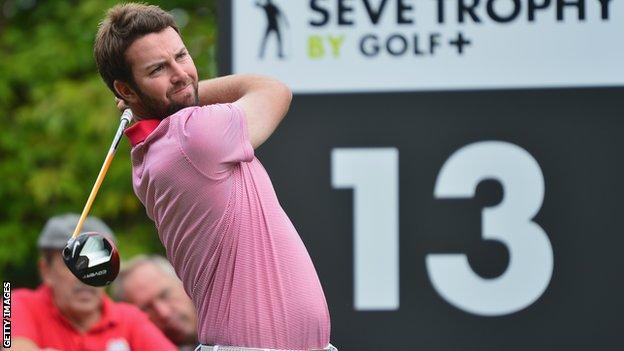 Scott Jamieson's birdie-birdie finish helped Great Britain and Ireland close the gap on Continental Europe to a single point in the Seve Trophy.

The Scot and English partner David Lynn trailed Italians Francesco Molinari and Matteo Manassero by one in Friday's fourballs with two holes remaining.

But Jamieson snatched the victory, though Europe still lead 5½-4½.

Eligibility: The top five players in the world rankings plus the top five in the Race to Dubai

Jose Maria Olazabal's Europe, looking to end a run of six straight defeats in the competition, led 3½-1½ after the opening day and remain in front thanks to wins for Joost Luiten and Gregory Bourdy, plus Nicolas Colsaerts and Gonzalo Fernandez-Castano.

English duo Casey and Khan gave Sam Torrance's team a good start to Friday's matches at St-Nom-La-Breteche in France with a 3&2 victory over Finn Mikko Ilonen and Thorbjorn Olesen of Denmark.

A brilliant rescue shot from Casey left them three up after seven and they went on to close out the win.

But Belgian Colsaerts and Spaniard Fernandez-Castano equalled the biggest winning margin in the tournament's history to restore their team's three-point advantage.

They added to a 5&3 win on the opening day with a resounding 6&5 success against Scots Paul Lawrie and Stephen Gallacher.

After the Scot's birdie at 17, Manassero missed from eight feet on 18 and Jamieson stepped up again to sink a six-foot birdie that left the overall standings all-square.

But Dutchman Luiten and French team-mate Bourdy edged out English pair Tommy Fleetwood and Chris Wood despite a late fightback from the GB & Ireland duo.

The Europeans were three up after 14 and two up with two to play, but Wood holed an eagle on the 17th to ensure it would go down to the final hole.

However, Luiten and Bourdy edged home after Fleetwood missed from six feet on the final green as Europe ended the day in front.