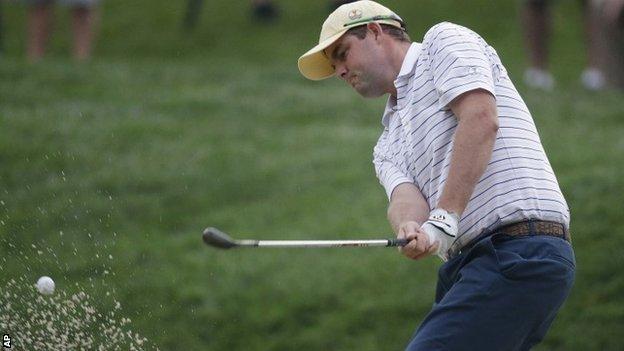 The United States continue to lead the International team by one point at the Presidents Cup after day two's rain-hit schedule was completed on Saturday.

The US lead 6½-5½ after both teams won two of the four foursomes matches that remained unfinished on Friday.

Marc Leishman holed a crucial birdie on the 17th as he and Angel Cabrera beat Brandt Snedeker and Webb Simpson 2&1 to keep the Internationals in touch.

There are a further 10 points to be won on Saturday and 12 on Sunday.

Fading light on Friday forced play at the Ryder Cup-style event to be suspended after heavy rain caused a delay of almost three hours.

Phil Mickelson and Keegan Bradley had already won 4&3 against Jason Day and Graham DeLaet to put the US 4½-2½ ahead at Muirfield Village, Ohio.

Mickelson and Bradley lost the opening hole but hit back with a run of seven birdies in eight holes from the fifth to go six up with six to play.

Australian Day and Canadian DeLaet won the next two holes but the 15th was halved in pars, enough to give the home side the win.

South African Ernie Els and Brendon de Jonge of Zimbabwe won three of the first five holes as they secured a 4&3 victory over Bill Haas and Hunter Mahan, who failed to win a hole.

Woods and Kuchar won three of the first nine holes to go two up and, despite posting a bogey four on their final hole of the day, extended their advantage after Oosthuizen's tee shot landed in water, leading to a double-bogey five.

Early on Saturday, Kuchar holed from 13 feet as the Americans clinched a comfortable 4&2 victory after birdieing the 16th.

On Friday, Stricker and Spieth had moved one up after seven when rain took the players off the course. When play resumed, the Americans birdied the eighth, 10th and 12th holes to move four clear.

However, the American duo got the half they need on 17 to close out victory.

But the Americans started strongly on Saturday, winning the 13th, 14th and 15th to ensure a nervous finish for Australian Scott and Matsuyama, who eventually won 2&1.

It is the first time since 2005 the International team has not lost a foursome session.