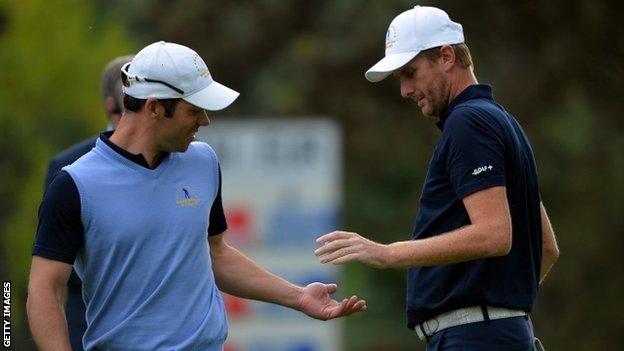 Great Britain & Ireland pegged back Continental Europe to level the Seve Trophy at 9-9 at St-Nom-La-Breteche.

Europe moved into an 8-6 lead by winning two and halving one of the four Saturday morning foursomes.

But David Lynn, partnered by Paul Casey, holed a 10-foot putt on the 18th to defeat Miguel Angel Jimenez and Matteo Manassero one up and tie the match after the afternoon foursomes.

Europe had led 5½-4½ overnight and took the initiative on Saturday morning.

But that was cancelled out when a par was enough for Jimenez and Manassero to beat Casey and Tommy Fleetwood on the final hole to move Europe into a commanding lead.

But Sam Torrance's team responded in the afternoon session to pull level ahead of Sunday's 10 singles matches.

After Gallacher and Lawrie beat Colsaerts and Fernandez-Castano 2&1, Donaldson and Warren won the 15th and 16th holes on the way to a 2&1 win over Mikko Ilonen and Thomas Bjorn.

Luiten and Bourdy briefly regained Europe's lead with a birdie on the last to beat Wood and Jamieson by two holes.

But Lynn drained his putt on the 18th to overcome Jimenez and Manassero and take Great Britain & Ireland level.

Jose Maria Olazabal's Europe have lost the last six meetings and are looking for their first win since 2000.