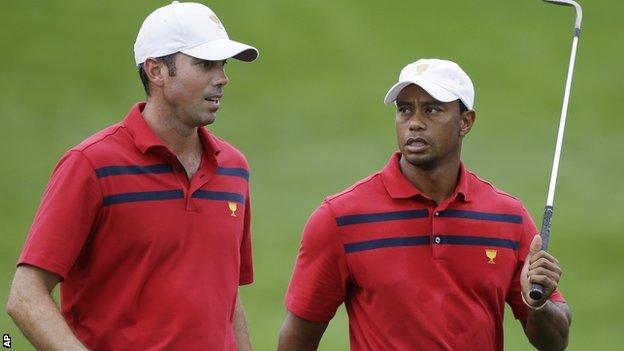 The United States have built up a five-point lead over the International team at a storm-affected Presidents Cup at Muirfield Village, Ohio.

The hosts won four of Saturday's five fourball matches and the only foursomes match to be completed to open a 11½-6½ lead as rain again interrupted play.

The US need six of 16 points available to win for the fifth time in a row.

"It's not over," Internationals captain Nick Price said. "We've still got a lot of golf to play."

The singles matches have been shifted to the morning in an effort to try and escape the storms which are expected to return in the afternoon and have delayed play on the previous three days.

Saturday's play started with the completion of four of Friday's foursomes and both sides collected two points to leave the US with a one-point lead at 6½-5½.

The hosts then dominated the five fourball matches with Bill Haas and Webb Simpson completing a 4&3 win over Argentina's Angel Cabrera and Branden Grace of South Africa.

Birdies from Haas at the sixth and ninth and Simpson at the seventh and 10th helped them to win their match.

Americans Keegan Bradley and Phil Mickelson won five out of eight holes from the eighth to come back from two down after seven to earn a 2&1 win over South African duo Ernie Els and Brendon de Jonge.

Canada's Graham DeLaet birdied the last hole to ensure he and Australian playing partner Jason Day pulled a point back with a two-up victory over Steve Stricker and Jordan Spieth.

But Brandt Snedeker and Hunter Mahan restored the American's three-point lead with a win over South Africa pair Louis Oosthuizen and Charl Schwartzel.

Tiger Woods and Matt Kuchar won three successive holes from the 13th on the way to beating Japan's Hideki Matsuyama and Adam Scott of Australia to round-off a dominant performance from the US in the fourballs.

In the only foursomes match to be completed, Australia's Marc Leishman and Richard Sterne of South Africa started well and were two up after six holes against Jason Dufner and Zach Johnson.

But the Americans won five of seven holes from the seventh and finished the match with an eagle three at the par-five 15th.

The International team lead two of the four matches to be completed on Sunday with the Americans up in one and the other is tied.

Els and De Jonge are two up against Woods and Kuchar after nine holes, while Oosthuizen and Schwartzel are three up after 12 holes against Simpson and Snedeker.

Haas and Stricker are two up against Matsuyama and Scott after 10 holes and Mickelson and Bradley are all square with Day and DeLaet after 13 holes.