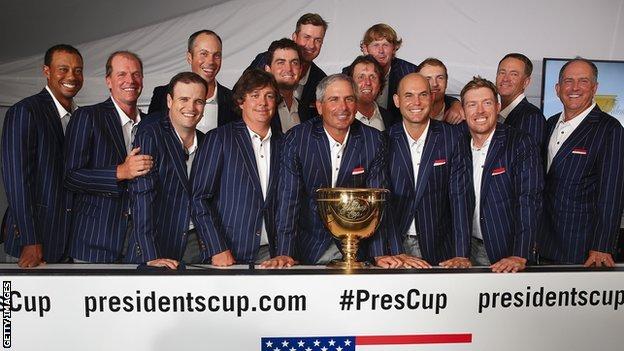 The United States secured a fifth successive Presidents Cup win with an 18½-15½ victory over the Internationals at Muirfield Village.

The hosts led 11½-6½ before Sunday's four foursome matches, held over because of storms, and 12 singles.

The US have now won eight of the 10 stagings of the event, with one draw.

In addition, it was the third victory in a row for US captain Fred Couples.

The US needed only four points from Sunday's singles to retain the Cup, having established a lead of 14-8 after the delayed final foursomes session.

US PGA champion Jason Dufner beat Zimbabwean Brendon de Jonge 4&3, while Canada's Graham DeLaet holed out from a greenside bunker for birdie at the 18th to edge Jordan Spieth one up.

Zach Johnson wrapped up a comfortable 4&2 win over South African Branden Grace to put the US 17-10 ahead, before Masters champion Adam Scott scored another win for the Internationals with a 2&1 win over Bill Haas.

South African Ernie Els scraped past Steve Stricker one up, Australian Marc Leishman sank a 14-footer from the fringe to par the last and beat Matt Kuchar by the same margin before former Masters champion Charl Schwartzel of South Africa beat Keegan Bradley 2&1.

But world number one Woods, who won three matches out of four in partnership with Kuchar earlier in the week, shrugged off back pain to cinch overall victory with two matches to finish.

Jordan Spieth lost to Graham DeLaet one down

Steve Stricker lost to Ernie Els one down

Matt Kuchar lost to Marc Leishman one down

Phil Mickelson lost to Angel Cabrera one down