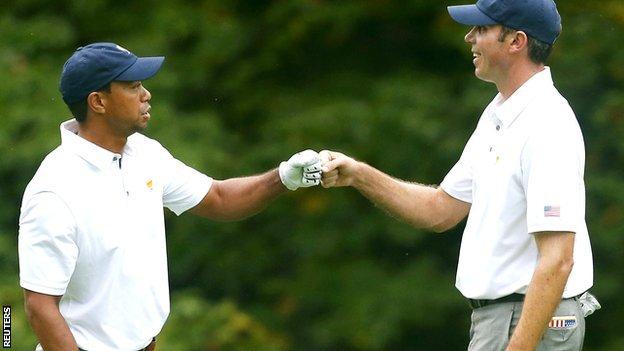 They were well choreographed, flamboyantly touchy-feely and made a huge impact on the scoreboard.

Instead it was the combination of Tiger Woods and Matt Kuchar for the United States in the Presidents Cup.

As predictable outcomes go, yet another US victory in their biennial clashes with the Internationals was on a par with the early exit of Jacklin and his two left feet.

World number three Phil Mickelson enjoys the Presidents Cup - he has played in every edition since its inception in 1994.

The next time the former Open and US Open champion hears the word Charleston, it should be when he fancies a game at Kiawah Island. But as Jacklin said after his dance-floor demise, it had still been "a wonderful experience."

He didn't go as far as to say it was "fun" but this was probably because that word had been reserved for exclusive use at the Presidents Cup. Muirfield Village was the fun factory.

None of the Americans could complete an interview without saying how much "fun" they were having. It was had on the golf course where they completed a fifth straight win, in the team room and on the ping-pong table.

Chief "funster" was, of course, five-time major winner Phil Mickelson, who "just loves" this week having played in every edition of the Presidents Cup since its inception in 1994.

It may be apocryphal but I'm sure somewhere down the line he has described this event as "a bunch of funsies". Whether he did or not, it is a pretty apt phrase, especially for the ever victorious Americans.

Even Woods seems to love it. The world number one is a different animal when playing for his country and the opposition isn't European.

He is far from the tense, uptight and sometimes uninterested figure that plays Ryder Cups. At Muirfield Village he was all exaggerated high fives as Kuchar coaxed him into the handshakes from "Fresh Prince of Bel-Air."

When Woods is doing his version of Will Smith on the golf course then you know he is a contented being. Why, he even smiled when girlfriend Lindsey Vonn popped a squirrel on his shoulder.

After witnessing this, a recent conversation with a senior European Tour official during the Alfred Dunhill Links at St Andrews suddenly seemed relevant.

"If America ever want to get the best out of Tiger at a Ryder Cup, they should make Freddie Couples captain," the executive said.

This was the third and final Couples captaincy in the Presidents Cup and the 181/2 - 151/2 victory provided a hat-trick of wins for the 1992 Masters champion.

Under the leadership of Couples, Woods has won 11 out of 15 points. He claimed five out of five at Harding Park in 2009 and this time was top scorer with his four points.

Couples knows how to coax the best from Woods, who by the end was nursing a recurrence of his recent back problems. He was still able, though, to clinch the winning point.

Referring to his back, Woods said: "Went out on me at 14 and from then on it just kept getting worse. But, you know, hey, I got a point for our team so that's all that matters."

Now there is a commitment to the cause that we frequently believe is beyond Woods when it comes to the Ryder Cup.

He gets an often unfair press because his motivation levels are questioned. The fact is he is as determined as ever at Ryder Cups but rarely comes anywhere near his best golf.

Woods presence can also intimidate and inhibit his partners. Only once - back in 1999 - has he been on the winning side.

The American captain for next year's clash at Gleneagles, Tom Watson, admits he is baffled by Woods's poor Ryder Cup record.

Watson is keen to find out what it takes to get the best from the 14-times major champion. A phone call to Freddie might be the ideal starting point.

But it should be remembered that the Presidents Cup falls way short of the Ryder Cup for resonance and significance. The Internationals have won only once in its 19-year history.

"In order for the Presidents Cup to really go to the next level, it's got to become more consistently competitive," International skipper Nick Price has admitted. "That is what's lacking.

Price would advocate the Presidents Cup adopting the format used for the Ryder Cup where the teams play for a maximum of 28 points.

In an interview prior to the Muirfield Village clash he said: "When you've only got four pairings and you've got 12 guys to choose from, that's a lot easier because you take your best players."

Price skippered a team with seven rookies and although they mounted a final day comeback in the singles a 14-8 deficit was always going to prove too much.

Afterwards Mickelson said it had been "a bunch of fun" but said there was "no intensity". That sums up the Presidents Cup.

Maybe that's how it should be - an end of term party where the guys and their gals get together and everyone has "fun".

Perhaps we shouldn't judge it too harshly. As Jacklin will testify, there's too much of that about anyway.