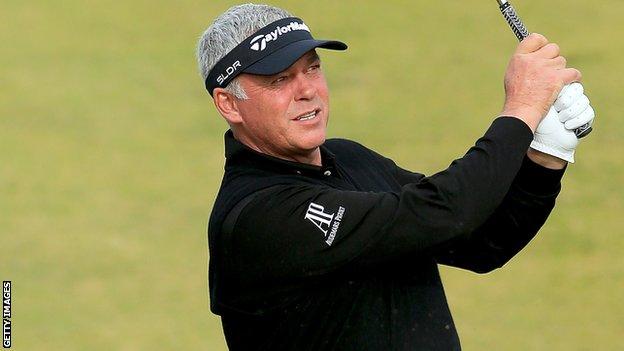 Darren Clarke tied for second place at the Nanshan China Masters as a level-par final round left him one shot behind winner Charl Schwartzel.

Schwartzel dug deep for a four-under 68 to finish ahead of Clarke and defending champion Liang Wenchong, who had led jointly going into the final round.

Two behind the leaders overnight, Schwartzel birdied the 15th and 16th to draw level with Clarke.

A loose tee-shot at the par-three 17th proved crucial as Clarke made a bogey.

The 2011 Open champion had moved into serious contention thanks to a four-under-par 68 in Saturday's third round on the Montgomerie Course at the Nanshan International Golf Club.

Clarke, seeking his first victory since claiming the Open Championship at Royal St George's in 2011, seemed to be cruising until missing a three-footer on the 13th.

"I'm obviously disappointed with the day - it was another one of those days on the greens again where I couldn't buy a putt from anywhere," he said.

The Northern Ireland player still had a share of the lead on the 17th until finding the thick fringe of a greenside bunker.

"It was horrible. It couldn't have got any worse," he said, after hacking it out and missing the par putt.

"Still, that's golf and they've got a very good winner here, a fantastic winner, and that's the way it is. It's like that sometimes, unfortunately. "

Both Liang and Clarke had the chance to force a play-off on the 18th, but the hole had yielded only one birdie all day and the pair saw their attempts come up short.