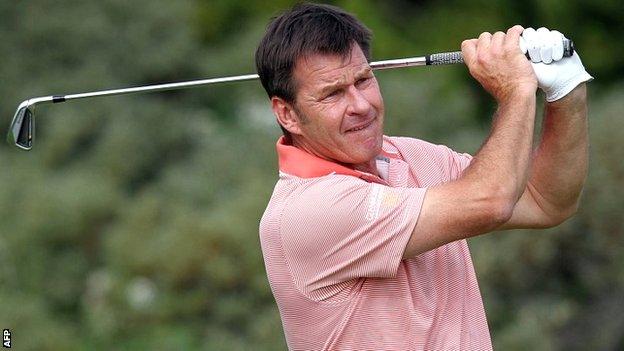 Six-time major winner Sir Nick Faldo failed to finish the first round of his American debut on the Champions Tour.

The 56-year-old withdrew after 12 holes in the SAS Championship in Cary, North Carolina because of an elbow injury.

Faldo tweaked a torn capsule in his left elbow as he made a gesture during a putt on the sixth hole before battling on to the 13th tee.

The Englishman was at one over when he walked off the course after shaking hands with his playing partners.

Another rookie in the field is Colin Montgomerie, who turned 50 in July, and the Scotsman shot a one-under 71 to finish five behind leaders Russ Cochran, Larry Nelson and Welshman Mark Mouland.

Asked about his aims for this week before the competition, Faldo - who played alongside Americans Tom Kite and Kenny Perry in the opening round at the Prestonwood Country Club - said: "I hope I can get my name on that leaderboard and see what it feels like again. That was always the thrill in my playing career."

Faldo played in this year's Open Championship at Muirfield after a three-year break, but missed the cut after rounds of 78 and 79.

He has appeared in two previous British Senior Open tournaments, finishing in a share of 14th at Muirfield in 2007 and tied for 38th at Sunningdale in 2009.

Faldo's last individual tournament victory was the 1997 Nissan Open at the Riviera Country Club in Los Angeles and he is now based in the United States, where he is the lead analyst for CBS and the Golf Channel.