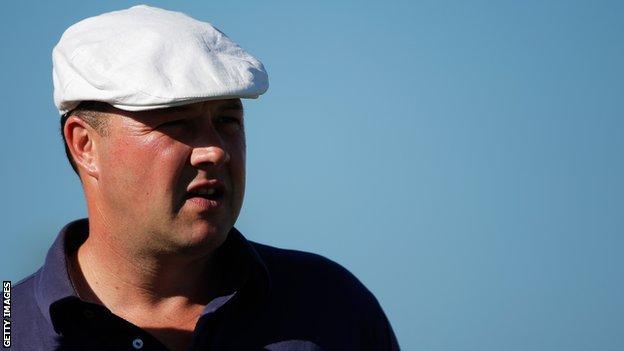 Scotland's Chris Doak went some way towards retaining his European Tour card for next season with a superb second round at the Portugal Masters.

The 35-year-old had five birdies and an eagle in his 64 to sit one shot behind the leaders at Vilamoura.

Doak is 112th on the Race to Dubai with only the top 110 after next week's Perth International keeping their full privilages for next season.

The Glaswegian, of course, has to keep his form going into the next two rounds and will be looking to chase leaders Hennie Otto of South Africa and English pair Paul Waring and David Lynn.

"Especially bogey-free for two rounds, anybody will take that," said Doak, who is tied on 11-under-par with Austria's Bernd Wiesberger.

"The mind tends to race, so I am just trying to relax and, when you are you relaxed, you can execute the shots properly and that's what I have done the last two days."

Doak had said before the tournament in Portugal that he hoped for a high finish so he did not have to travel to Australia for the final event of the season in order to retain his card.

Waring hit 63 and playing partner Otto a 64, one better than Lynn.

Paul Lawrie is four strokes behind compatriot Doak after a second round of 66, while Stephen Gallacher is another stroke back after his 67.

David Drysdale and Scott Jamieson are on three under, with Richie Ramsay just making the cut on two under.