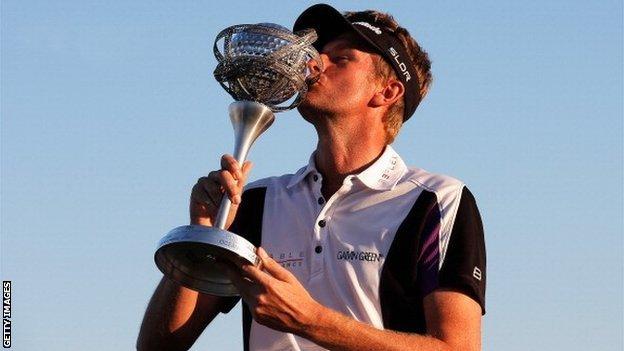 England's David Lynn shot a final-round 63 to win the Portugal Masters and give him a first European Tour title since his KLM Open win nine years ago.

The 39-year-old was eight under for his round to set a clubhouse target of 18 under that proved unbeatable.

Overnight leader Paul Waring of England shot a level-par round to tie for third with Scotland's Stephen Gallacher and Austrian Bernd Wiesberger.

Jamie Donaldson of Wales was among those who shared sixth place at the Oceanico Victoria course in Vilamoura, with England's Ross Fisher a shot further back.

Scotland's Scott Jamieson failed to back up his stunning third-round of 60, suffering three bogies on the back nine for a one-over par 72 to fade to a tie for 13th.

"It's emotional," said Lynn, from Stoke, who still has close ties with Trentham, the Staffordshire course where he grew up.

"To go nine years without a victory and come close so many times you start to question whether you can do it again.

"It feels fantastic. This one's special as it's been so long since a win and it's just a week before my 40th birthday.

"To get another win before I turn 40 is an early birthday present."

He started the fourth round in 16th place, but made nine birdies as he came from six shots off the pace,

Having birdied the 17th, he then enjoyed a stroke of fortune on the 18th after his approach narrowly escaped the water, before safely two-putting - then enduring a long wait before knowing that his score had been good enough to win.

"I was half-heartedly watching on TV," he said. "You don't wish bad on other golfers out there but you do start to feel a bit selfish, hoping their putts don't go in.

"But I've had to bide my time, and now I've finally got my hands on a trophy again."