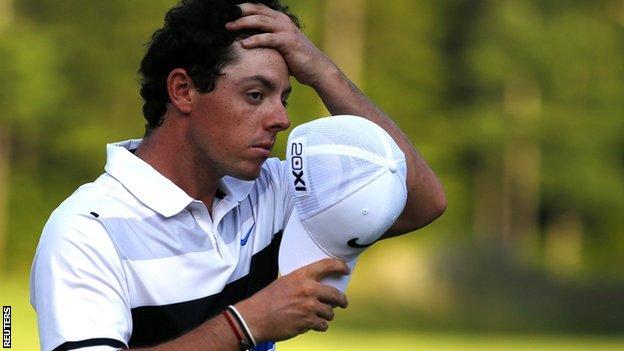 Ernie Els once described this as the time of year when you get out the wheelbarrow, hitch it to the private jet, take it round the golfing globe and fill it with appearance money.

The theory is that most of the sport's important titles have already been decided. Now it's time to cash in on the position you have earned in the game.

Els said it only once. His trademark honesty was regarded as rather distasteful by some but his words carry an element of truth.

This week Rory McIlroy embarks on a lucrative tour of Asia. For him, though, the emphasis is more centred on form than finance.

Such a scenario certainly was not envisaged when he drew up his schedule earlier in the year. The former world number one would have expected much more from what has been an awful season.

McIlroy failed to make the top 30 on the PGA Tour and so didn't qualify for last month's Tour Championship. This means he has not played competitively in four weeks.

The 24-year-old lies 60th on the European Tour's Race to Dubai. The earning opportunities at the upcoming BMW Masters and HSBC Champions events in Shanghai should be enough for him to scrape into the Tour's finale in the Middle East.

But it is a far cry from last year when he majestically triumphed at the Dubai season-ender having already wrapped up the money lists on both sides of the Atlantic.

This week his wheelbarrow will be stuffed with a reported £940,000 appearance fee at the Korean Open which heralds the start of a hectic month in Asia.

The current world number six leaves behind an unsettling set of circumstances. His lawyers are at Dublin High Court, taking on his former agent, while his PR team fend off enquiries over the end of his two-year relationship with tennis star Caroline Wozniacki.

It has the potential to be messy for all parties.

Veteran South African Gary Player recently told ESPN: "If you're a young man like Rory, you can't play with worries.

On the upside, McIlroy seems to have spent his recent time away from competitive golf sorting out his affairs. Crucially he has established his own management structure which should enable him to prioritise his golf.

Leave the rest to the experts. Let them do their stuff in the courtrooms and press briefings.

On the course the Northern Irishman has to allow his clubs to do the talking. His new Nike sticks need to be more fluent than they have been in this stuttering season.

One runner-up finish and only three more top-10s has been a poor return for someone who began the year at the top of the golfing world.

The next three weeks, which also include a well-remunerated head-to-head with Tiger Woods at Mission Hills in China, are about much more than their earning potential.

This is the time for McIlroy to show that he is back and ready to tap into a well of potential that has always suggested titles will be won by the barrow load.

That said, you can never be sure when the next win might come. For example, it took David Lynn nine years to taste victory for the second time.

His triumph at the Portuguese Masters was due reward for the Englishman who is about to turn 40 and was runner-up to McIlroy at last year's PGA Championship at Kiawah Island.

Lynn's sensational closing 63 provided a fitting climax but if anything the victor was overshadowed by runner-up Justin Walters.

The South African who represented Britain in his amateur days, thanks to an English mother, leaped from 126th to 71st in the Race to Dubai and secured his card for next year.

All this was achieved just a fortnight after his mum passed away. It is little wonder he dissolved into tears after holing the 40-footer on the 72nd green to claim second place.

The European Tour now heads to Australia for the Perth International. Several players will be looking to emulate Walters in what is effectively their last chance to retain playing privileges for 2014.

Fisher had a similarly glittering amateur career to McIlroy but their pro careers have gone in largely opposite directions with the 2011 Czech Open the Essex man's lone triumph.

Right now, though, they share plenty in common. They have much for which to play in the closing weeks of this golfing year.