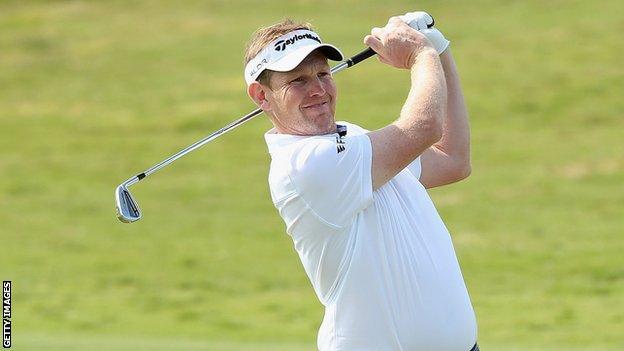 Stephen Gallacher hopes to maintain his good form over "five massive tournaments" as he seeks ranking and Ryder Cup points.

and is 14th in the European Tour order of merit.

And the 38-year-old ends the year with events in China, Turkey and Dubai before November's World Cup in Australia.

"It's all to play for, a good time to peak," said Gallacher.

"It's been a great year. Last week was good - they were tough conditions.

There are a lot of Scots on the tour now as well and a lot of them are winning and competing, which is great

"I've got five weeks in a row to finish the season, so I'm really looking forward to that.

"They are five massive tournaments, four of them anyway and then the World Cup. Four of them are small fields, no cut and with most of the top players playing, so lots of ranking points and lots of Ryder Cup points [are at stake].

"I'm just hitting the ball a bit closer and putting a bit better."

in February and has had six top-10 finishes in the subsequent tournaments.

Compatriots Scott Jamieson, Paul Lawrie and Marc Warren are also in the order of merit's top 60 and, with Scotland bidding for their first World Cup triumph since 2007, Gallacher believes the country's golfing future is "in great hands".

"There are a lot of Scots on the tour now as well and a lot of them are winning and competing, which is great," he added.

"That's just the key I think - get as many as we can out there.

"There were four of us last week at the Seve Trophy, which was a great showing.

"There are a lot of us out and playing every week, keeping our card, contending and getting up the rankings. I think it's great just now."