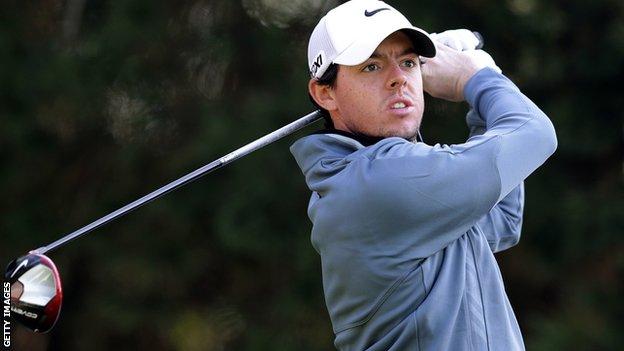 Rory McIlroy moved to three under and within two shots of the lead at the Korea Open after a dramatic second round which contained only six pars.

The world number six from Northern Ireland carded three bogeys in a row in his opening nine but responded with four birdies in seven holes for 69.

"I'm driving the ball well and for the most part my iron play is pretty good," McIlroy told the OneAsia website.

McIlroy is tied-fourth while Korea's Soon-sang Hong is one stroke clear.

Starting on the back nine, he picked up birdies at 10 and 13 although a bogey came at 12.

The 24-year-old recovered well from three straight bogeys from the 14th, with a birdie at 18 before picking up shots at two, five, seven and eight.

A closing bogey typified McIlroy's inconsistent form but he remains in contention going into the weekend.

The former world number one finished tied for third at the Korea Open in 2009 and was the runner-up in 2011 behind American Rickie Fowler.

McIlroy, who recently confirmed that he is setting up his own management company after splitting with Horizon Sports, will hope to gain some confidence ahead of the upcoming series of lucrative events, which start with next week's £4.35m BMW Masters in Shanghai.

After a stunning 2012 season which included his second major victory - the US PGA Championship at Kiawah Island - McIlroy has failed to register a win in 2013.