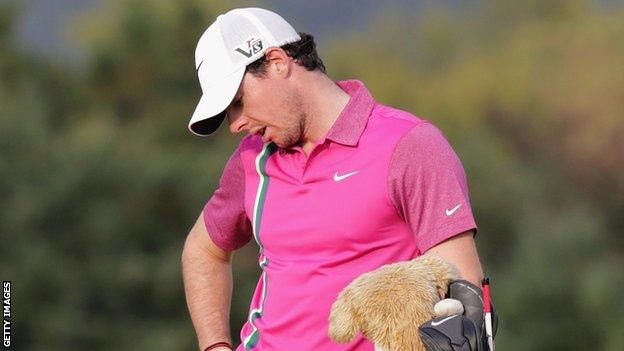 Rory McIlroy appears to have little chance of breaking his 2013 drought after a four-over third-round 75 left him 10 shots behind at the Korea Open.

The Northern Irishman, 24, began day two in a share of fifth but he missed chances on the front nine and went slipped further adrift after the turn.

McIlroy, who has not won since changing his clubs at the start of the year, is one over par for the tournament.

Kim Hyung-tae shot a 66 to take a four-shot lead into the final day.

World number six McIlroy went out in level par at the Woo Jeong Hills Country Club course near Cheonan after his only birdie of the day - at the par-five fifth - was cancelled out by a bogey at the next.

He double-bogeyed the par-four 10th and dropped further shots at the 11th and 15th.

Overnight leader Hong Soon-sang could manage only a level par 71, dropping him into second on five under.

"It is a struggle, especially where they've put some of the pin positions. It is tough to get yourself to commit to a certain line because you will hit a few and they will go through the break, and some turn more than others."

McIlroy, the top draw at the event, promised one final assault on Sunday.

"Last time here (in 2011) I shot 64 in the last round so it would need something probably similar or a little better to have a chance," he said.