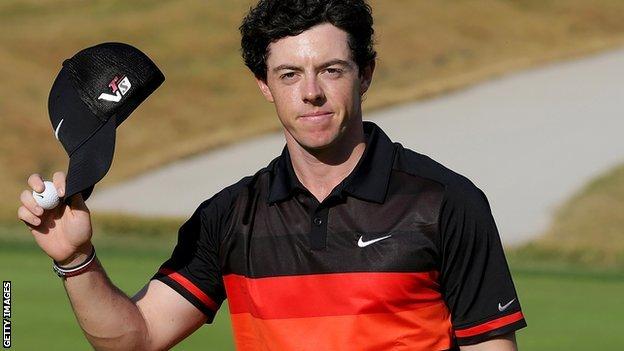 Rory McIlroy claimed a share of second place at the Korea Open after a 67 in Sunday's final round.

The Northern Irishman, who had fallen 10 shots behind the lead after three rounds, carded five birdies in his round to end one behind Korean winner Kang Sung-hoon, who was four under par.

The only blemish for world number six McIlroy was a bogey at the 16th.

Overnight leader Kim Hyung-tae was penalised two strokes for grounding a club in a hazard on the 13th hole.

It was a strong finish for McIlroy after what had been a frustrating third day for the two-time major winner at the Woo Jeong Hills Country Club course near Cheonan.

McIlroy, the star attraction at the OneAsia Tour event, said: "I could have shot anything, absolutely anything.

"I only missed two greens and had so many chances, but it was like the story of yesterday - I just didn't hole enough putts.

"I created so many more chances today that it could have been 61, 62. It just wasn't to be.

"I didn't birdie any of the par fives, which was disappointing. I felt like it could have been so much lower the last couple of days."

Kim had begun the final round with a four-stroke lead and was on course for victory standing on the 17th tee only to be told by an official he was been penalised for for an indiscretion on the 12th.

The South Korean then bogeyed the 17th and could only par the 18th.

But after finishing his round, Kim returned to the 13th and argued for two hours that he had not grounded his club before finally accepting his penalty and signing his card for a six-over-par 77 to finish alongside McIlroy on three under.

Kang won the title after coming home in 32, finishing a crucial birdie at the last.