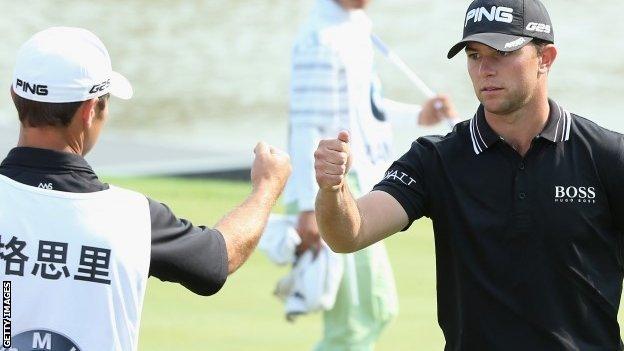 Luke Guthrie leads the BMW Masters in Shanghai by three shots after carding a seven-under-par 65 in the first round.

The 23-year-old American, making his debut on the European Tour, had five birdies before chipping in for an eagle three on the par-five 15th.

John Daly is second on four under, one ahead of the third American in the 78-man field, Peter Uihlein.

Graeme McDowell holed a near 100-foot putt to share fourth on two under while Rory McIlroy is one under.

The Northern Irish duo were playing together at the first of four tournaments which make up the inaugural $30m (£18m) Final Series on the European Tour.

McDowell is trying to catch Sweden's Henrik Stenson who leads the Race to Dubai standings by a little over £360,000 and he did his chances no harm with his monster putt on the 13th.

"The eagle was nice," said the world number 12. "It was just one of those. A bit of a bonus really. The putt was a good putt but it was fortunate to go in and it was probably going to be six to eight feet by."

Just 13 players broke par on a windy day at the Lake Malaren Golf Club with Guthrie, who shot a 64 to finish fifth in Las Vegas on Sunday, leading the way.

"It was one of the better rounds I've ever played," he said. "It's hard to control the ball exactly where you want to leave it but when I did miss I gave myself a chance and I was able to short-game my way around."

Daly, the 1995 Open champion, also had no bogeys on his card in his first competitive round after undergoing surgery on an elbow injury.

English duo Paul Casey and Simon Dyson are in a seven-way tie for fourth on two under, along with Scotland's Craig Lee.