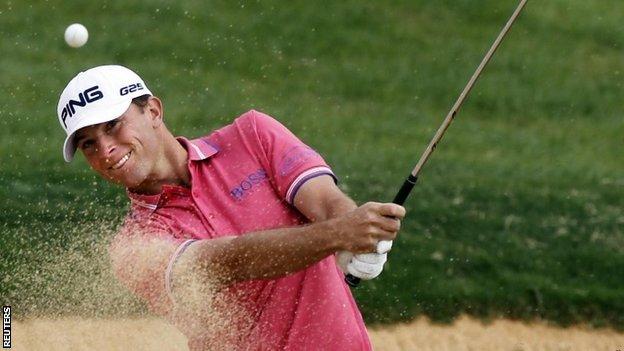 Luke Guthrie extended his lead at the BMW Masters to four shots with a one-under-par 71 in round two.

The American matched his first-round total of five birdies, but four bogeys checked his progress in Shanghai as he reached halfway on eight under.

Rory McIlroy, Lee Westwood and Ian Poulter are among a group on one under.

Guthrie, who led by three overnight, started with a birdie in calmer conditions on Friday but his lead was cut to one when Dyson birdied the 15th.

However, 23-year-old Guthrie, playing in his first European Tour event, also birdied the 15th and followed that with another birdie on 17.

He finished with a bogey but still picked up another shot on Dyson, who dropped two at the last after failing to escape from a greenside bunker at the first attempt.

Jamieson, Thailand's Thongchai Jaidee and Argentina's Ricardo Gonzalez would have been in the tie for second on five under had they all not also dropped a shot at the last.

Northern Ireland's Graeme McDowell, who is second in the Race to Dubai standings, reached three under with a birdie on the 13th but three bogeys in the next four holes saw him drop back to level par.

Henrik Stenson, who leads the money list, had four bogeys in his first 11 holes as he fell away to four over but three successive birdies from the 13th helped him finish two over.

The BMW Masters is the first of four tournaments which make up the inaugural $30m (£18m) Final Series on the European Tour.