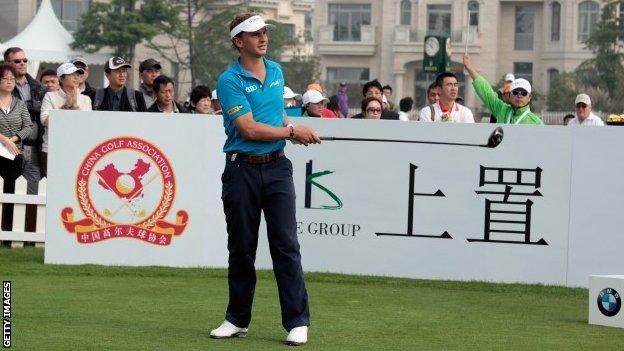 Luke Donald blamed European Tour rules for Joost Luiten's decision to withdraw after hitting only one shot at the BMW Masters in Shanghai.

Dutchman Luiten injured his shoulder this week but did not pull out because it would affect his chances of playing in the Race to Dubai's final event.

He is 11th in the Race to Dubai standings and must play in two of the three events before November's finale.

"If that rule wasn't in effect then Joost would have withdrawn prior to event and first reserve would have got to play."

South Africa's Justin Walters was the first reserve and the man to miss out, however, he too had sympathy for Luiten.

He wrote on Twitter: "No hard feelings towards Joost Luiten he came and spoke to me about the situation.

"Obviously some changes will be made to the Tour surrounding the Race To Dubai play-offs. It's unfortunate I had to be the guinea pig."

The BMW Masters is the first of four events in the inaugural European Tour Final Series, a $30m (£18m) competition similar to the US PGA Tour's season-ending FedEx Cup.

By teeing off, Luiten, who has not qualified for next week's WGC-HSBC Champions event in Shanghai, was deemed to have taken part in the first tournament.

And if his injury is still troubling him, he could turn up at the following event in Antalya, Turkey and hit one shot again to qualify to play in the World Tour Championship in Dubai.

Only the top 60 players in Europe who have also played two out of the three preceding events will be eligible.

According to playing partner Donald, Luiten, who has won two European Tour events this season, hit his tee shot "120 yards, straight down the middle" before shaking hands and heading back to the Netherlands for a scan.

The rules are designed to ensure high-quality fields at the first three of the Race to Dubai's Final Series events - two in Shanghai and one in Turkey - and not just for the $8m (£4.9m) season-ending tournament in Dubai which carries a $3.75m (£2.3m) bonus pool for the top 10 in the Race To Dubai standings.

Luiten was on the reserve list for this year's Open and was denied the chance to play when Peter Hanson tried to play with a back injury, only for the Swede to pull out after five holes at Muirfield.