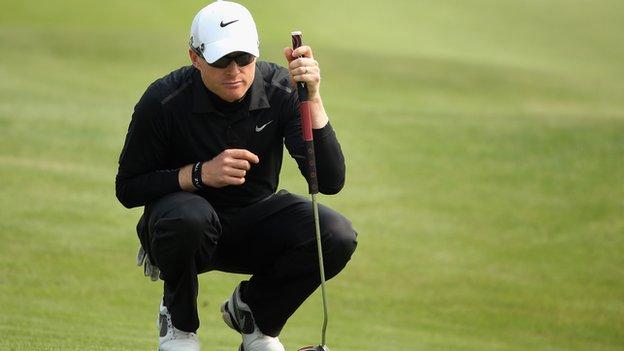 England's Simon Dyson could miss out on the Race to Dubai finale after he was disqualified ahead of round three of the Shanghai Masters at Lake Malaren.

Dyson was four shots off the lead but was penalised for tapping down a spot on the green directly between his ball and the cup during the second round.

The 35-year-old did not add the necessary two-shot penalty to his card.

Dyson, a winner of six European Tour titles, shot a second-round 70 and shared second place behind Guthrie with five other players ahead of Saturday's play.

A review found Dyson had violated rule 16-1a, which forbids a player from touching the line of the putt.

"When the footage was reviewed, Simon was seen to touch the line of his second putt after marking and lifting his ball on the green," said Paramor.

"He subsequently failed to add a two-shot penalty to his score when signing his card, and as a result has now been disqualified.

"He was bitterly disappointed. He had no way of explaining why or how he came to do what he did. He had no recollection of it until I showed him and even then he said 'I can't even remember doing it.'

"It's a very sad thing and unfortunately his event is over."

Dyson is ranked 66th on the European Tour with the top 60 qualifying for next month's World Tour Championship in Dubai.

The Yorkshireman is not eligible for next week's WGC-HSBC Champions event in Shanghai and will have just the Turkish Open to try to make the season-ending Dubai event.

Guthrie looked likely to maintain the lead he held since halfway through the opening round, but dropped shots on 16 and 18 led to a third-round of 72 and allowed Cabrera-Bello to share the lead.

Cabrera-Bello's round of 67 was only equalled by fellow Spaniard Gonzalo Fernandez-Castano, who sits one shot off the pace in third.

Paul Casey finished one under for the day and is just three shots off the leaders, while bogeys on eight, nine, 17 and 18 hampered Lee Westwood's progress as he finished on three under.

McIlroy, who claimed he was getting back to his best earlier in the week, hit four consecutive birdies to start his back nine, but a double-bogey on the last leaves him six shots off the lead going into the final round.