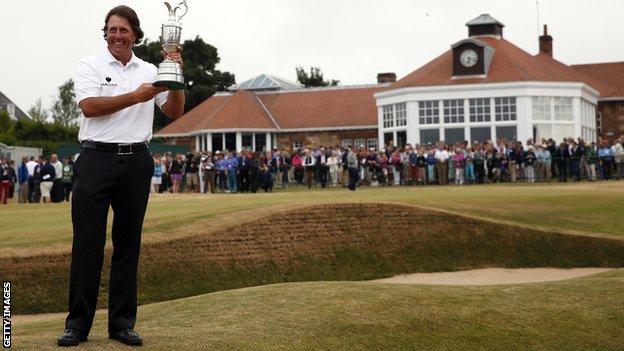 Open Championship qualifying has been revamped with the introduction of a new international qualifying series, the R&A has announced.

Tournaments including the AT&T National and Irish Open will offer qualifying places for next year's Open at Hoylake.

"The new move will allow the same range of players to have a go at entering the Open but be more straightforward in terms of their schedules, so they won't have a separate tournament to play in.

Ways to qualify for the Open Championship

"More and more it will introduce a 72-hole qualifying event, which is more rigorous than our previous 36-hole International Final Qualifying events."

The change will see 10 existing worldwide Tour events offering Open qualification in addition to the four UK-based final qualifying events for those who progress through one of the 13 regional qualifying tournaments.

In all, 44 qualification places will be available to players at tournaments spread across the PGA Tour, the European Tour, the PGA Tour of Australasia, the Sunshine Tour and the Japan Golf Tour, to fill the Open's 156-man field.

Many of the world's top players, including 2012 winner Phil Mickelson, will be exempt from qualifying through a number of criteria including world or domestic tour ranking or previous results at the Open.

The Australian Open on 28 November will be the first event in the series, while in the three weeks leading up to the Open in July, the AT&T National, Greenbrier Classic and John Deere Classic will offer qualification places to players on the PGA Tour.

Despite winning the Irish Open two weeks before this year's Open Championship, Paul Casey did not qualify for the tournament at Muirfield.

The move to 72-hole qualifying is "fairer" for players, according to 1999 Open Champion Paul Lawrie, while two-time Open champion Padraig Harrington also welcomed the new series.

"I really do think it will attract more players to the Irish Open, especially those who are not already exempt for the Open Championship, and some quality players will be in that category," said Harrington.

"It's a nice boost for the European Tour from the R&A."