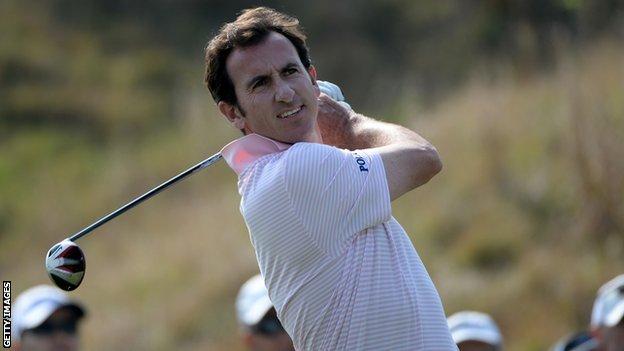 Gonzalo Fernandez-Castano shot a final round of 68 to win the Shanghai Masters - his seventh European Tour victory.

The Spaniard, 32, chipped in on 17 to lead by three shots at Lake Malaren, but a double-bogey at the last hole saw him finish one clear of Francesco Molinari and Thongchai Jaidee.

Italian Molinari held the clubhouse lead on 10 under, but six birdies in 12 holes gave Fernandez-Castano victory.

"On the last I tried to play too conservative and it was a fighting double-bogey that's for sure," said Fernandez-Castano, who is moving to Florida this winter and playing mainly on the PGA Tour next season.

"The win comes from some good hard work in Valderrama with my coaches last week and it has paid off."

Before this victory, Fernando-Castano's most recent win came at last year's Italian Open and he put himself into contention in Shanghai when a five-under-par third round left him one shot adrift of leaders Rafa Cabrera-Bello and Luke Guthrie.

American Guthrie eventually finished fourth, while any challenge from Casey disappeared with two bogeys on 12 and 13.

McIlroy was plagued by five bogeys as he finished one over on the day and a steady front nine with two birdies from Fernandez-Castano provided the platform for a first win of 2013.

Last year's winner Peter Hanson earned the best score of the day with a nine under 63, but a brilliant run of five birdies and an eagle from Molinari set the clubhouse lead at 10-under-par.

Thailand's Jaidee levelled with Molinari, only for Fernandez-Castano to take the outright lead on the back nine with birdies on 11 and 13.

An eight-feet putt on 15 and a chip in from the fringe of the green on 17 afforded him a three-shot cushion on the 18th and, despite finding two bunkers, he putted from two feet to seal the title.

The win moves the two-time Italian Open winner up to fourth place in the race to Dubai standings for next month's World Tour Championship.