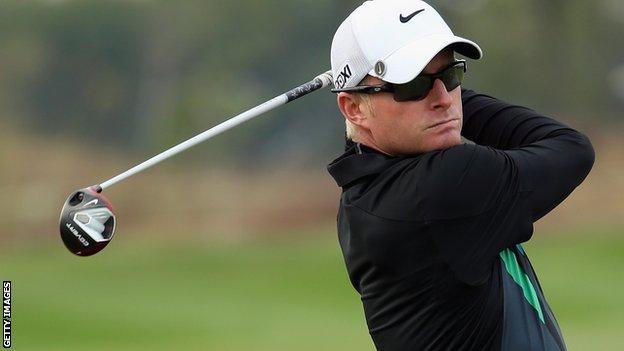 Simon Dyson could be banned from the European Tour after signing an incorrect scorecard at last week's Shanghai Masters.

The Englishman, 35, was disqualified from the tournament after failing to add a two-shot penalty to his card.

After marking his ball on the eighth green during his second round, Dyson touched the ground in his putting line.

Dyson denies deliberately fixing a spike mark in the line of a putt, calling it an "accidental mistake".

Expulsion is the most severe punishment that officials could impose on the six-time Tour winner.

I have never deliberately broken the rules, either on this occasion or in the past

A review found Dyson had violated rule 16-1a, which forbids a player from touching the ground in the line of a putt.

Senior European Tour officials concluded that an investigation into an alleged "serious breach" of the Tour's code of behaviour was required.

"I have never deliberately broken the rules, either on this occasion or in the past," said Dyson.

"It was only after I was shown the replay of my action after marking the ball on the eighth green during the second round that I realised what I had done and that I was in breach.

"I immediately accepted that I should be disqualified.

"My action was in no way a deliberate act with the intention of breaking the rules. It was simply an accidental mistake."