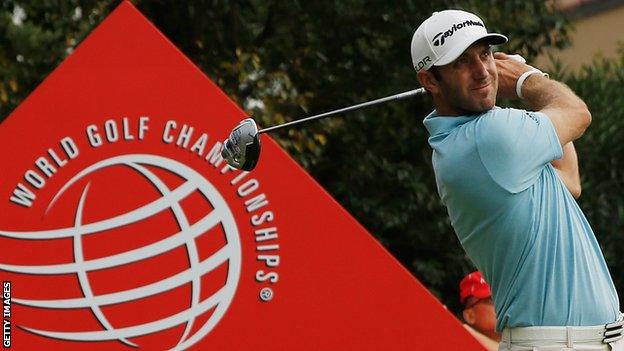 America's Dustin Johnson holds a three-shot lead at the WGC-HSBC Champions tournament in Shanghai despite posting two double bogeys in the third-round.

Johnson led by five overnight and holed 10 birdies but dropped two shots on the 10th and 18th to finish on 18 under.

England's Ian Poulter is second on 15 under after a nine-under round of 63.

Northern Ireland's Graeme McDowell (64) is third on 13 under while compatriot Rory McIlroy (67) and England's Justin Rose (65) are joint fourth on 12 under.

"I'm still a little mad from my double-bogey on 18," Johnson told a news conference at Sheshan International Golf Club.

"Obviously to have a three-shot lead going into the last day is good and I am looking forward to the challenge. I still have to play really well.

"The guys that are right behind me, they are playing very well, too. So it's going to be a tough day."

McDowell will be mindful that his 2010 US Open win came after Johnson squandered a three-shot lead with a triple-bogey on the second hole and a double-bogey on the third in the final round at Pebble Beach.

But the Northern Irishman, who is second behind Henrik Stenson in the Race to Dubai, said: "From here it looks like Dustin is going to have to beat himself for anybody to have a chance to catch him."

US Open champion Rose birdied four of the last five holes to climb the leaderboard and join first-round leader Rory McIlroy, who also picked up shots on the final two holes, and Canada's Graham DeLaet on 12 under.

Germany's Martin Kaymer was the big mover of the day, moving into a tie for seventh after sinking 10 birdies to set a new course record with a flawless 62.

Poulter, looking to become only the second player after world number one Tiger Woods to defend a WGC title, had charged up the leaderboard with five birdies in a row from the third and another on the ninth to be out in 30.

He also birdied the 10th but Johnson was producing some equally impressive figures, making five birdies in a row from the fifth to match Poulter's outward score.

However, the seven-time PGA Tour winner then made a complete mess of the 10th, coming up short of the green with his approach and then twice seeing his pitch to the green fail to get to the top of a steep slope and roll back to his feet.

His third attempt clattered into the pin and in the end Johnson did well to hole from 12 feet to limit the damage to a double-bogey six.

When Poulter then holed from 20 feet for an eagle on the 14th the gap was suddenly one shot, but Johnson responded once more with birdies on the 13th, 14th, 15th and 16th.

Poulter three-putted the 17th for his only bogey of the day but birdied the last to remain firmly in the hunt for the first prize of more than £856,000.