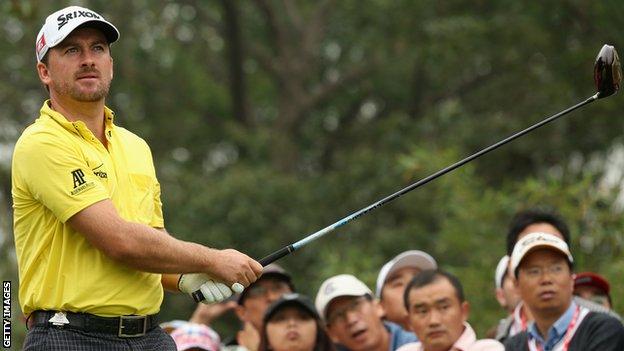 Graeme McDowell admitted to some regret despite finishing third with a closing 66 in the WGC-HSBC Champions tournament in Shanghai.

McDowell ended four shots behind winner Dustin Johnson and has closed the gap on Race to Dubai leader Henrik Stenson.

"There is a pang of disappointment, but I am proud of the way I played, tee to green especially," McDowell said.

McIlroy had to climb from 62nd in the money list - which he won last year - to inside the top 60 to qualify for Dubai, and did so with plenty to spare.

The former world number one held a two-shot lead after an opening 65, but a second-round 72 ultimately proved costly and a closing 69 left him nine shots behind winner Dustin Johnson.

"It was a good week. It was a step in the right direction for sure," said McIlroy, who moved up to 38th in the Race to Dubai.

"I don't think anyone could have competed with Dustin this week. He played very well and obviously is a deserved champion.

"I just didn't make enough birdies. I didn't take advantage of the par fives today and some of the short par fours.

"It is something to build on and nice to go into an off-week now and I know that I am into Dubai."

McIlroy, who remains without a win in 2013 after five victories last year, added: "It would have been nice to try to get a win. I have three more tournaments left this year and I want to try to finish the season strongly.

"Obviously I have good memories going to Dubai from winning there last year, so hopefully I can put up a strong defence of my title there."

Meanwhile, McIlroy's fellow Northern Irishman McDowell did not drop a single shot over the weekend as he closed the gap on Stenson at the top of the Race to Dubai to just over 145,000 points.

"I shot 14 under on the weekend. Dustin Johnson was in a different league off the tee and gave us a little bit of a sniff and then promptly slammed the door," he added.